The Australian War Memorial has embraced the rainbow.

Apparently uniformed ADF participation in the disgraceful and offensive Mardi Gras is now worthy of a place alongside galleries devoted to deeds of valour in Flanders, Tobruk and Vietnam. The names of those killed fighting for this country now share a space with tributes exalting those who prance down Oxford Street.

It is an insult of immense magnitude.

You can see the online gallery here. 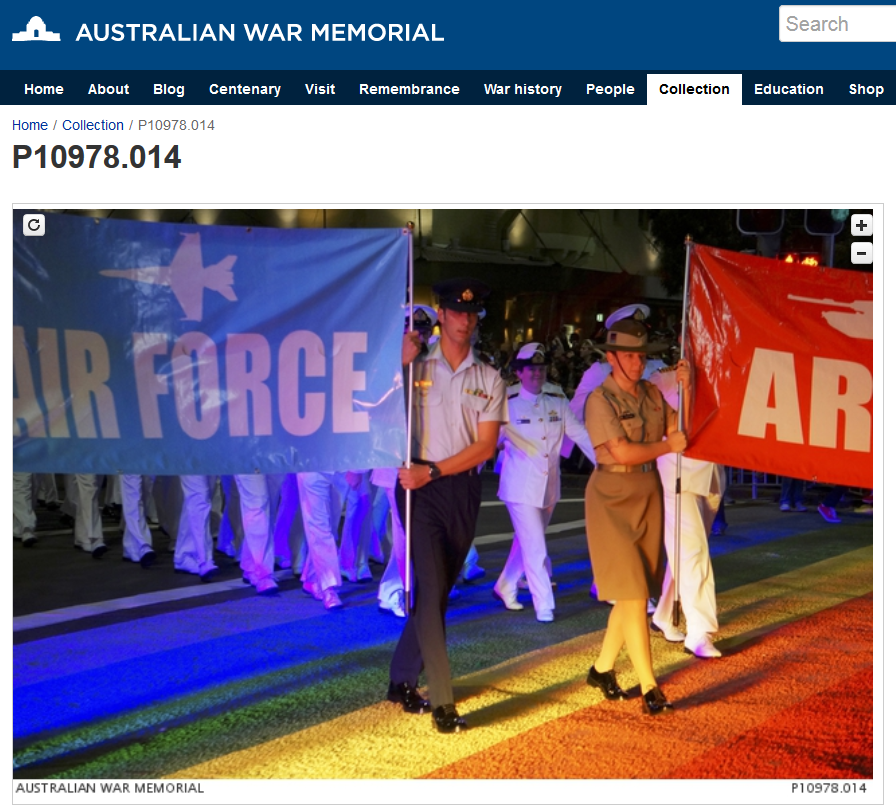 And as the Army Newspaper states, this will soon become a permanent physical display. The infamous orders allowing uniformed ADF personnel to march in a radical political rally are to be framed and hung alongside the names of the fallen.

“ADF participation in the Mardi Gras is the culmination of efforts by staff in Defence People Group’s Diversity Directorate and DEFGLIS. Documents relating to the participation, including the orders signed by Gen Hurley and interviews with the personnel who volunteered, are being prepared for future preservation in Australian War Memorial archives.”

My Great Grandfather’s cousin, Tom Godfrey, is one of those whose name is engraved upon the War Memorial’s Roll of Honour. His name is also etched on Menin Gate, along with many other Australians who lie in unmarked graves in France and Belgium.

When he won his Military Cross he was not fighting for homosexuality. He was a Catholic and he was fighting for a country built on Christian values. His efforts and sacrifice are now spat upon. And he is not the only relative I have whose name will now share space with the promotion of this shameful disgrace.

Most other Australian families will have a similar story about a lost uncle or father who never came home.

Let me be very clear about this: ADF participation in the Mardi Gras is not about ensuring equal rights. It is about giving homosexuals special privileges that necessarily remove freedom from all other soldiers.

Homosexual members of the ADF were always able to march in the Mardi Gras. They just had to obey the same rules as every other serving member: no political activity in uniform.

But they have been given a dispensation from this rule and many others, including those that relate to unacceptable behaviour. Homosexual ADF members are the only soldiers who can campaign politically in uniform. Because this privilege has been given to them, all other ADF members are now required to be silent, even when they speak and act as private citizens, or lose their jobs.

Career progression is now based on an assessment of how supportive the officer in question is of homosexual political activism.

This is not about freedom. It is all about removing freedom.

Therefore, it is an absolute insult that those Australians who gave their lives for our freedoms are now being abused to promote an attack on the free practice of religious belief and the free expression of political opinion in this country.

This precedent follows a recent decision by the Australian War Memorial to remove the words ‘Known Unto God’ from the Tomb of the Unknown Soldier.

Fortunately, this politically-correct foolishness was scotched after the election of the Abbott government. A good thing too. As this letter from the Australian War Memorial shows, the words that would have replaced this inscription were not even grammatically correct. Who can spot the missing apostrophe? 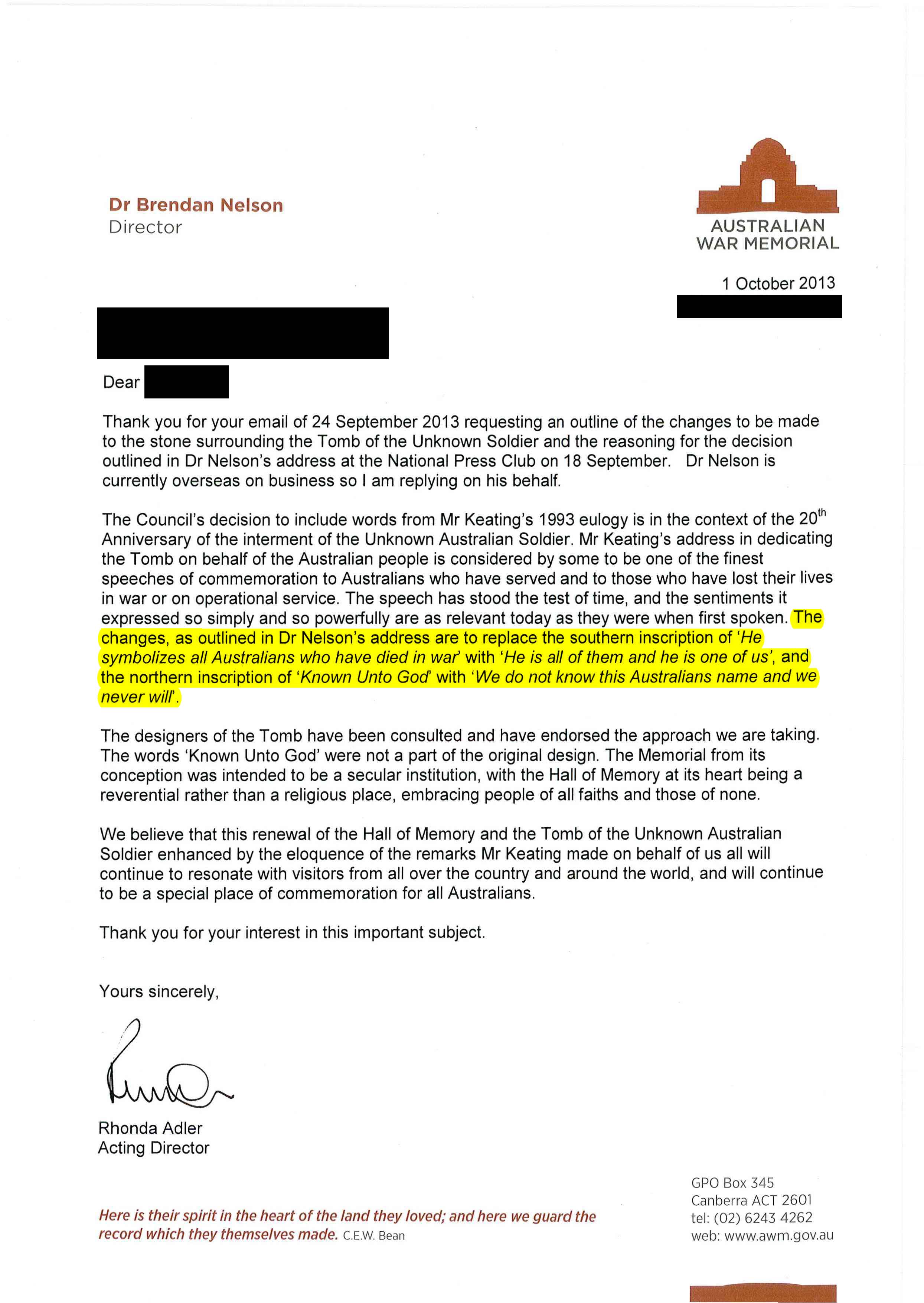 Unfortunately, the Australian War Memorial is going ahead with plans to replace the words ‘He symbolises all Australians who have died in war’ with a line from former Prime Minister, Paul Keating. It will soon read ‘He is all of them and he is one of us’. Essentially, a statement that means something is to be cast aside for a bland epitaph that makes us feel good about ourselves.

The pursuit of PC karma truly destroys all culture and civilisation. Why? Because to be politically-correct, one necessarily has to accept that the wrong, the mediocre, the foul and the uncouth are all as worthy as that which is good and true. The only standard is that there are no standards at all.

And that is the sad new standard of the Australian War Memorial.

UPDATE: A number of people have asked if anything can be done to change the Australian War Memorial’s promotion of the Mardi Gras. The answer is yes. A public backlash forced the War Memorial to shelve its plan to scrub the words “Known Unto God” from the Tomb of the Unknown Soldier.

If you take the time to write, you can also influence the War Memorial on its latest insult.

Please write to Dr Brendan Nelson at the address below, or use the email or phone numbers provided. 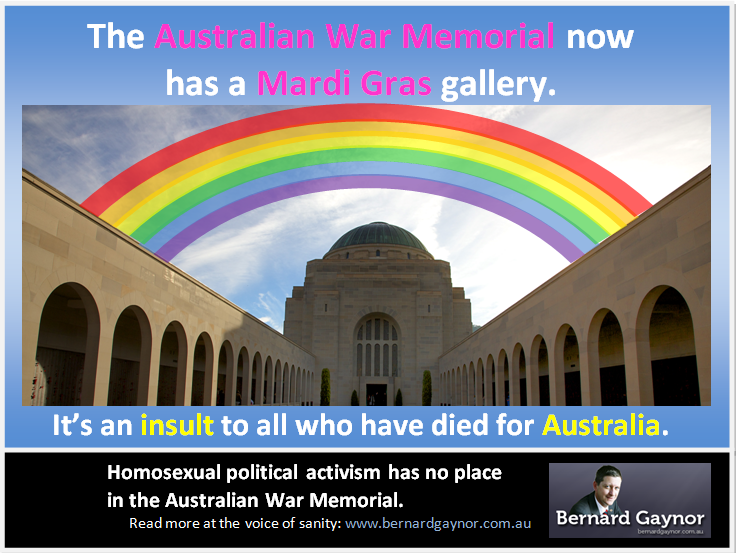