The Wednesday was the day the betrayal began.

The chief priests and the leaders of the people started it with meeting. It had one item on the agenda: how to apprehend Him and put Him to death.

It was not an easy task to accomplish. The multitude was on His side. Just three days ago they had welcomed Him into Jerusalem as the Messiah. He was lauded as the king fit for David’s throne. But this task was also one that was urgent. If they waited until the Pasch, He might stir up the people and cause a tumult amongst them. That was something the Romans would not be well pleased with.

Suddenly, help came from an unexpected corner. One of the Twelve approached. It was Judas and he had a simple question: what will you give me if I deliver Him to you?

The answer was simple too: thirty pieces of silver. It was the price of God. It was also the price of a slave.

Luke wrote that Satan entered into Judas. Matthew added that from henceforth Judas sought the opportunity to betray Him. Mark says the chief priests were glad. John had already recounted that Judas longed for gold.

Now Judas had his thirty pieces of silver. But it would not bring him happiness as the events of the next two days showed. 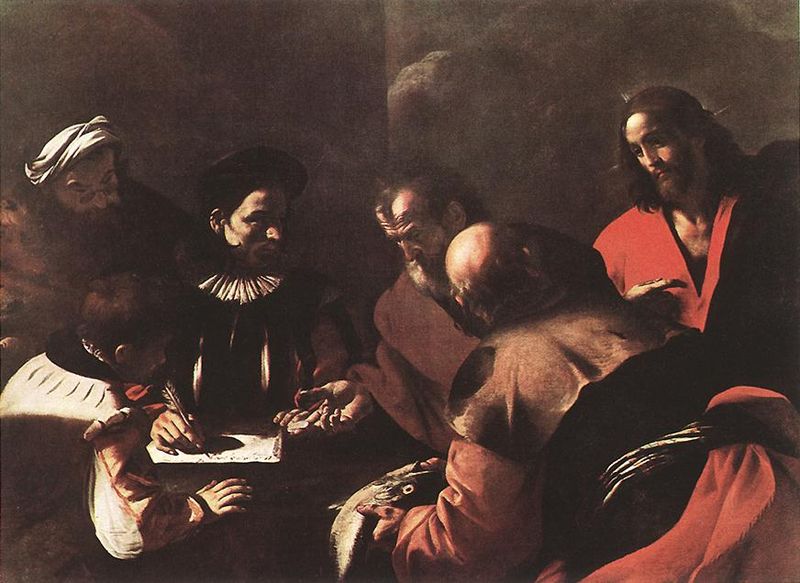 Mattia Preti’s Tribute Money was completed around 1640.
It is displayed at the Pinacoteca di Brera gallery in Milan.

It is clear that Judas was motivated by the lure of wealth. But Judas also loved his Master, as his bitter and regretful end showed. It was just not a pure love. In fact, it was an insulting and selfish love that denied the immense power of God to forgive.

We all find ourselves in Judas’ shoes. But we still have the opportunity to choose a different ending. Peter shows this is possible.

Some speculate that Judas was impatient. He wanted his Master to take control and usher in the new era. Judas thought he could spur Him into action.

If true, there can be no doubt that Judas had a misguided faith. He was betting that his Master would vanquish His enemies in an earthly show down and emerge triumphant. Judas still did not understand that He had come for bigger reasons.

But whatever Judas’ motivation, the wheels were now in motion. The pivot point of history was at hand.

That was the Wednesday.

See also in this series:

I have relied heavily on Guiseppe Ricciotti’s book, Life of Christ, for this article. It was translated by Alba I. Zizzamia and published by the Mercier Press, Ireland in 1955. It carries the imprimatur of the Archbishop of Milwaukee, Moses Kiley, dated 6 February, 1952.