In yonder times, Anzac Day was all about remembering the sacrifices of Australian and New Zealand war veterans, especially those who gave everything they had for our respective countries. It also provided a day for a grateful nation to pause and pay tribute to those men and women who currently serve in dangerous corners of the globe to protect our freedoms.

But, apparently, that is not the case anymore.

At least, that’s the impression you’d get if you skipped the local Dawn Service and just tuned into what the Chief of Army, Lieutenant General David Morrison, had to say about this most important event in the national calendar.

Morrison has spent the better part of the last week lambasting what he calls the myth of Anzac Day.

According to him, the national pride shown on Anzac Day is a primary reason homosexuals are not joining up. And then, on Anzac Day morn, he gave a speech that declared white Aussie Diggers have a lesser love for this nation than Aboriginals. Furthermore, Morrison went on to infer that Anzac Day was hurtful to the Indigenous community.

Morrison might like talking up the myth of Anzac Day, but the truth is that he’s just peddling a few porkies of his own.

Using Anzac Day to push the homosexual political agenda and to promote the lie of ‘Invasion Day’ is about as insulting as it gets. But there is one thing that rubs salt into the wounds more. And that is completely failing to mention those who currently serve on operations.

Unfortunately, that is exactly what the Chief of Army did in his official Anzac Day speech.

There is not a single nod in Morrison’s Anzac Day address to the 400 Australian Defence personnel who currently put their lives on the line in Afghanistan. He failed to mention the war at all and he should not be allowed to get away with it.

It’s as if Afghanistan is just an afterthought for the most senior soldier in the Australian Army. And that would certainly explain why Lieutenant General Morrison seems to spend more time lamenting the fact that homosexuals are not prepared to don the uniform than trying to win a war that is rapidly becoming the next failed military experiment.

However, considering the Chief of Army used Anzac Day to raise the issue of homosexuality and military service, I’ll happily bust open the door to that closet and expose some of the skeletons within that he’s dressed-up and presented in a less than truthful light.

Let’s start with an article published in the Australian Financial Review on 24 April. It begins like this:

“The Chief of Army, Lieutenant-General David Morrison, says he believes a myth has been created about the Anzacs that makes it harder for the military to recruit women, gays and people from different ethnic backgrounds.

Popular culture sees the “Australian soldier as a rough-hewn country lad – invariably white – a larrikin who fights best with a hangover and who never salutes officers…especially the Poms,” General Morrison said.

This “caricature” has become a “double-edged sword” for the military because it undermines recruitment and creates complacency about military service, he said in a recent speech to the Harvard Club of Australia in Sydney.”

Of course, we all know already that women, in general, simply do not have the same desire to serve in the military as men. There is no changing human nature and I’m certainly not suggesting that we should try to do so.

And I have previously written extensively that the Islamic community in Australia is 15 times less patriotic than the rest of us, but ten times more likely to mourn a son killed on the battlefield. It’s just that Al Qaeda et al have cornered this segment of the recruitment pool.

However, I’ve never made any comment about the likelihood or otherwise that a gay man would sign up to serve the nation. But now, thanks to Lieutenant General Morrison, we have an insight into this community. And, once again, it isn’t pretty.

David Morrison is banging on again about queers in the Army because he doesn’t think that enough of them are signing up. (By the way, I only use the word ‘queer’ because the LGBT community loves to describe itself with this insulting language – even they have no respect whatsoever for their own perverse lifestyle).

And unless he’s making this all up as he goes along, Morrison can only have come to that conclusion if he has some information that says, proportionately, there are less homosexuals in the military than there are in the general population.

So we can all thank Lieutenant General Morrison for pointing out a rather unhappy truth: the homosexual community is less likely to serve this nation in uniform than other segments of society.

The only reason the Chief of Army could possibly know that the homosexual participation rate in the military is low compared to the rate of homosexuality in the community is if he is now collecting information on the sexual preferences of his soldiers.

There can be no other conclusion, except that the good general is just making this stuff up. And it would be uncharitable to assume that. So I won’t.

Point number two is not just creepy, it also makes a mockery of the radically progressive cry that sexuality is irrelevant to military service. If it was, the Chief of Army would not be keeping tabs on who sleeps with what. In the post-modern era of sexual diversity, sexuality is now so un-irrelevant that the Army’s top brass are factoring it into recruiting. And, presumably, promotion as well.

That means targets. It means asking a bunch of questions about sexual preference. And, most of all, it also means that if you give the wrong answer (like, for instance, stating that you are heterosexual) then you run the risk of falling into an unwanted demographic.

If you haven’t put two and two together yet, what Lieutenant General David Morrison has implied in his recent statements is that the Australian Defence Force is now prioritising recruitment from the homosexual community.

Fortunately, he’s also admitted that plans to transform the military into a gay wonderland are failing.

So, in response, the Chief of Army has declared war on Anzac Day. In his estimation, if Anzac Day was a little less patriotic there would be more queens in the Queen’s service.

And this is where I’ll burst his bubble and shine a light into the closet he’s opened so that he can see what lurks inside.

The truth is that homosexuals don’t shun Anzac Day. They love it. It’s like Mardi Gras with uniforms. Apparently, that’s even better.

You can see just some of the LGBT advertising for Anzac Day below: 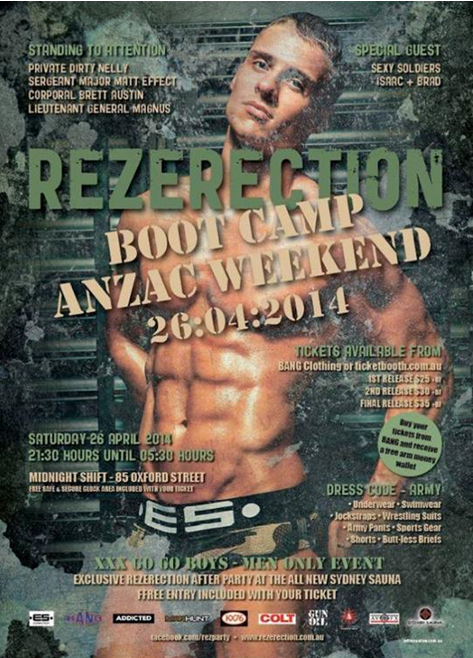 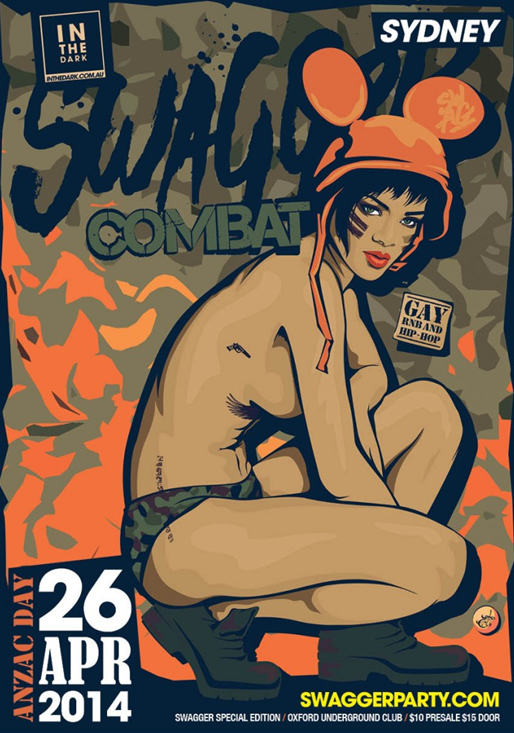 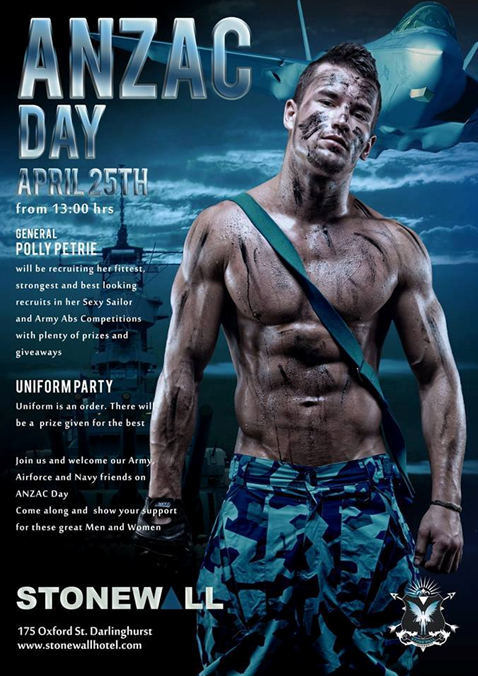 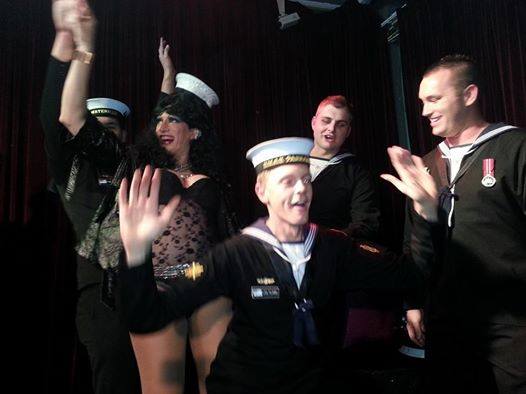 These images demonstrate many things, and one stands beyond dispute: the LGBT community is not afraid of Anzac Day.

They also show that if Lieutenant General Morrison’s trying to maintain high moral standards within the military, then he’s doing it wrong by promoting homosexuality.

Lieutenant General David Morrison’s recent statements about Anzac Day are an insult to decent Australians who show up in great numbers on April 25 to pay their respects. He should apologise.

But I won’t hold my breath. Integrity and moral courage are virtues completely lacking in the Australian Army’s highest office.