The courage of love triumphs over the brazen culture of death

The March for Babies was held in Melbourne on Saturday. I had planned to fly from Brisbane to attend the rally but other commitments intervened. However, I did follow closely on social media and readers of this site have given me a detailed debriefing of the day. Bill Muehlenberg, as always, has also provided a useful summary of the rally at this link.

By all accounts, the Victorian Police did a fine job this year. In fact, they marched off after the rally to the applause of the estimated 7,000 strong crowd, who were greatly impressed with their efforts to protect them. It must be considered a vast improvement over last year’s fiasco, which the Victorian Police have now apologised for. As such, they are to be congratulated for their superb work on Saturday. And you can congratulate them by leaving a message here.

It was also encouraging to see that members of the Victorian Country Fire Authority attended the March for Babies in their uniforms for the first time. Defence members also requested to attend this event in uniform, following the precedent set allowing uniformed military participation in the Sydney Gay and Lesbian Mardi Gras. Unfortunately, Defence’s commitment to diversity is sadly hypocritical. It’s okay to let members march with anti-life organisations promoting themselves to homosexuals in Sydney, but it’s not politically correct to let members march with pro-life groups in Melbourne. And the primary criteria which Defence uses to make this decision is based on who its members happen to sleep with. Defence’s policies violate anti-discrimination laws. 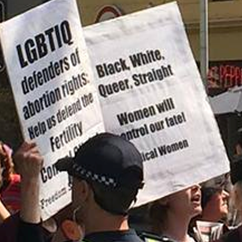 Defence: supports the anti-life political agenda of the LGBT lobby.

There will be more to follow on this front. You can rest assured of that.

And of course it screamed, ‘THE ONLY GOOD BABY IS A DEAD BABY!!!’. And it was wrapped in barbed wire for good measure. The menacing words were actually transformed into a weapon. 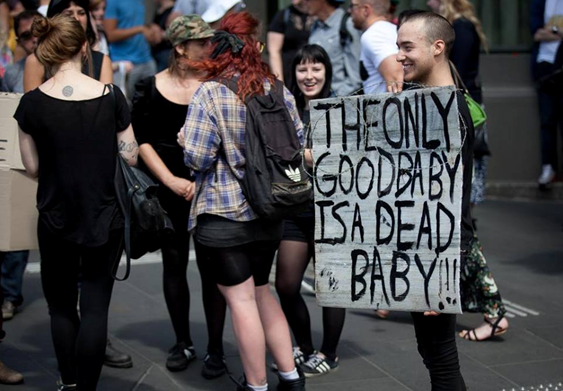 The proud face and message of the abortion lobby.

And just hours before that sign was brazenly foisted on the streets of Melbourne a little baby did lie dead, half a world away.

His name was Shane.

And he died on the day that he was born.

But in his very short life, Shane proved that each life is precious. That each life has meaning. And that love and hope are far more powerful than fear and selfishness.

Shane was diagnosed with anencephaly while growing in his mother’s womb. It is a rare condition affecting about 1/5000 pregnancies and it meant that his tiny brain and skull would not develop fully. Shane was not expected to live long after birth and his parents were advised about termination ‘options’.

Courageously, they chose to put their little son first. And their adventures have captured the world’s attention. Millions have followed Shane’s beautiful story. How could they not?

Only the most hardened heart could not feel the love of Shane’s parents as they chronicled his quests and very short life.

Only the coldest of hearts could not admire and be inspired by the joy of Shane’s parents as they celebrated his development, marked off each of his little accomplishments and rejoiced at his birth.

And only the most brutal and callous of hearts could laugh at the death of a baby, instead of empathising with the tremendous grief and pain of Shane’s parents as they lovingly said hello and goodbye to their little son in such quick succession.

The man behind the sign in Melbourne did just that. He might not have known of Shane’s story. He probably didn’t realise that at about the same time as he was painting the words on his sign, Shane was spending his last moments in the loving arms of his mother.

But his message said it all anyway. This is a man who revels in all death and any tragedy.  And as the new star of the pro-abortion lobby stood smiling behind his sign with its sadistic and psychopathic message, he personified the culture of death. Meanwhile, in the midst of death, Shane’s parents were exemplifying the love that is the culture of life.

And there is a gulf between these two cultures.

One of these cultures is bright. The other even dresses in black.

One of these cultures is based on love, even to death itself. The other kills for its own reasons.

One of these cultures inspires and is the gushing flood of hope. The other runs on the void of hopelessness.

And because one of these cultures is hopeful, it is tied to forgiveness. The other only offers the unremitting pain of guilt.

One of these cultures is good. It lifts the heart. The other has no heartbeat at all.

One of these cultures leads to God, who is Life and has conquered death. The other is wedded to Satan and his kingdom of death. And boasts of it. 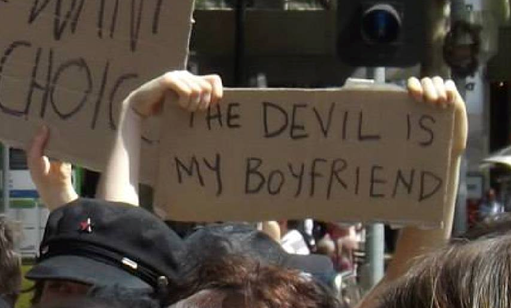 Pro-abortion protesters proclaim their love for the father of evil.

Shane’s parents live the culture of life. As a result they have proven that the shortest life is greater than abortion. But it comes at a price: courage.

The man in Melbourne lives the culture of death. And he unwittingly laid bare the truth regarding the abortion industry: it’s a barbaric business. Its price is the life of child. And it profits from their deaths by ravaging the souls of the fearful.

And when it comes to making money, the awful truth of the abortion industry is that the only good baby is a dead baby. That’s what it is all about. It’s only after a human being is placed inside a medical waste bag that the till is opened and the cash is stuffed in.

Shane could have been aborted. His parents were offered this ‘choice’. But they chose love and life instead. As a result they were able to hold their son.

In doing so, this brave young couple allowed Shane to shine. His life might have been short. He did not achieve great things by the modern way of thinking. In fact, Shane could not really do anything at all.

But he could ‘be’. And just like that, Shane propelled others to do things. The greatest things. To love beyond love imaginable. To be compassionate past the point of pain. To give everything for someone who could do nothing but be cared for.

Without Shane, his parents would never have become the true heroes that they are. And without the Shanes of this world, the rest of us are diminished. Humanity itself is brutalised.

We all become smaller. Those who support abortion support the stunting of society.

That is the communal tragedy of abortion. It hurts us all.

So from the bottom of my heart, I would like to applaud Shane’s parents, Jenna and Dan. I would like to thank them for their inspirational love and courage. And while I can only imagine their grief, I would like them to know that their decision is inspirational. The world is a better place for Shane who has accomplished his short but important mission. Now Shane has returned to the God who made him to be loved so greatly for his whole life.

God bless you both and your little son who was joyfully baptised on his birthday. 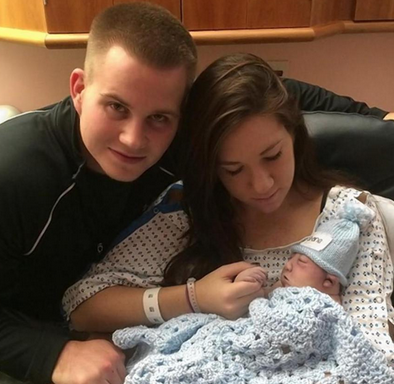