It’s amazing what you find when you read the annual reports of the New South Wales Anti-Discrimination Board.

As you can see below, this taxpayer-funded organisation of the warm and fuzzy has been taking advice from the ‘Sydney Beat Project’ since at least 2008/09 about the kind of people private schools should be forced to hire as teachers. It is rather disturbing that this has occurred, since the disgusting and criminal sexual offences promoted by the Sydney Beat Project have forced councils to effectively shut down public toilet blocks.

Of course, the Sydney Beat Project does not see things this way. It claims the above sign is ‘homophobic’. 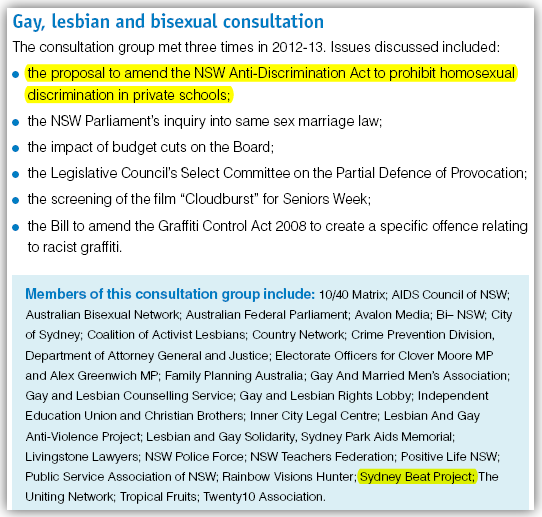 Just so you know, the aim of the ‘Sydney Beat Project’ is to change laws in New South Wales so that homosexuals can have sex in public. And it wants the New South Wales police to stand guard while they do and protect them from ‘homophobia’. This goal is stated loud and proud on its webpage. 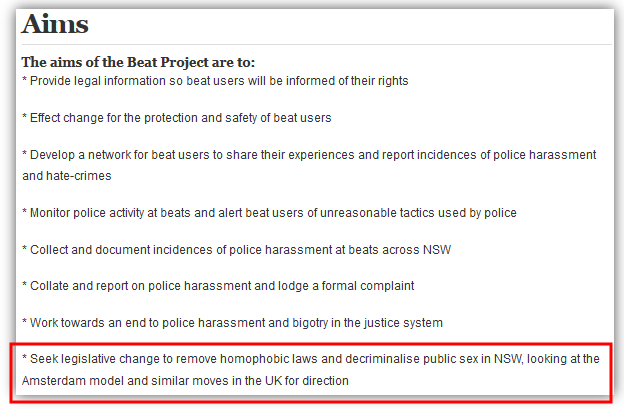 Screenshot of the Sydney Beat Project’s aims, listed on its website.

As such, any sensible person should take the educational concerns of these advocates for public immorality, shred them and then nuke them for good measure. And then the radioactive remnants should be placed at the bottom of a toxic-waste dump, sealed inside lead casing and stamped with the words ‘DO NOT EVER OPEN – HUMANITY ITSELF IS AT RISK’.

But decriminalising public sex for homosexuals is not enough for the NSW Beat Project. Its webpage also lists a bunch of information to help men who don’t care about the law to get away with having sex in public now. Basically, this involves running to the New South Wales Anti-Discrimination Board with complaints of ‘homophobia’ any time a police officer tries to do his job.

A screenshot of the NSW Beat Project’s homepage, complete with a prominent link to the New South Wales Anti-Discrimination Board.

The New South Wales taxpayer must be so pleased at the way the government uses the hard-earned dough it collects from its citizens each year.

For some unknown reason the word ‘homophobia’ wields magical power. It makes normally logical people stop whatever they are doing and grovel. Even to those who have sex in public. Even though it’s against the law. Even though it carries a sentence of up to three years’ imprisonment.

The homosexual lobby thinks that labelling someone ‘homophobic’ is the same as calling ‘bar’ when you were a kid. Except these people aren’t children and they aren’t playing games. But they are hanging around at the local park.

We know this because they say it.

For instance, they like hanging around Braye Park. The NSW Beat Project has extensive records of the dates and times that this has occurred going back to 2012.

And this is more than a little awkward because Braye Park is described by kidspot.com.au as a place that the whole family can enjoy. I don’t know how that is possible, considering the Newcastle Herald recently reported that up to 100 men ‘flock’ there every day for ‘casual sex’.

So you can probably cross this park off your family picnic list. It does have a good view, but you’re likely to get more of it than you bargained for.

Then there’s Camperdown Oval. It’s just over the road from a childcare centre. Luckily, it’s not too far from the RPA Sexual Health Clinic either. It specialises in testing and treating all sorts of exotic diseases.

NSW Beat Project also lists this place as a hook-up venue. Another website states that ladies play tennis in the daylight hours and so recommends the adjacent toilet block. Homosexual media outlets report that this facility ‘comes alive’ after dark. They actually sent a ‘reporter’ down there to talk to the men who came for public sex. One of them acknowledged that he’d been meeting at ‘beats’ since he was 14.

And the list of places that men are encouraged to attend and engage in sordid activity goes on: Carlingford Shopping Centre toilets, Central Station, 77 Berry Street washrooms and Town Hall Train Station are just a few of the many hundreds of places listed and advertised.

This is shocking. But it’s more concerning that these websites have not been shut down even though it is also a criminal offence in New South Wales to ‘incite’ someone to carry out a sexual offence. Instead, the NSW Beat Project website looks as if it is actually protected and supported by the New South Wales Anti-Discrimination Board. There’s a strong argument that this government body is aiding and abetting the criminal activity encouraged and promoted by this website by allowing itself to be linked so prominently on it and by conferring an air of legitimacy on the Sydney Beat Project by consulting with it about the hiring practices of (mostly Christian) private schools.

Of course, one of the reasons the Beat Project’s website has been set up is to report homophobic ‘hate-crimes’. And by hate-crime, the NSW Beat Project is specifically referring to the fact its readership don’t like getting mugged while caught with their pants down at the local public toilet block.

I bet they don’t. And while I’m not condoning or encouraging this activity, it’s a bit of stretch to call this a hate-crime.

And I have no sympathy either.

The whole thing is just bizarre. Anyone with enough objectivity to get past the cries of ‘homophobia’ can see that. All you have is a webpage set up by a bunch of people engaged in criminal activity complaining about a lack of police protection from another bunch of criminals. It’s akin to a drug cartel setting up a webpage to complain about the lack of police protection from the ‘hate-crimes’ of a rival gang.

If the Sydney Beat Project was run by normal adults with any shred of common-sense, it would realise that encouraging men to engage in compromising criminal activity is not the smartest thing one can do. And it is no surprise at all that entrepreneurial thugs see a business opportunity for extortion when the Sydney Beat Project’s website advertises the times and places that they can catch their targets literally with their pants down and breaking the law.

But if the Sydney Beat Project wants to be stupid, that’s their call.

It is another thing entirely for the New South Wales Anti-Discrimination Board to give it any support. The Sydney Beat Project is an organisation that promotes immoral behaviour and criminal activity. And this is not just about two grown men getting up to no good. Those who frequent beats, by their own admission, acknowledge that they did so as minors. And that means there is a very high risk that these places are hotspots for those who have committed sexual offences against children.

So the entire Anti-Discrimination Board should be sacked by the New South Wales government for associating with the Sydney Beat Project. And for asking its advice about who private schools should be forced to hire as teachers.

It is an absolute disgrace.

Unfortunately, no government will have the courage to do that. It just would not be ‘tolerant’.

But perhaps, just perhaps, the government could remind the Anti-Discrimination Board that if it is going to hold consultations about who private schools can refuse employment to, it might like to consult a little more widely than just the Sydney Beat Project and the other rainbow lobby groups that came along for the ride.

For instance, the Anti-Discrimination Board might like to actually consult private schools themselves. Because, so far, they have not been consulted at all.

And that is proof that the New South Wales Anti-Discrimination Board is biased, exclusionary and engaged in its own campaign of discrimination.

The New South Wales Anti-Discrimination Board has recently decided that anyone who criticises homosexual men for deliberately exposing their genitalia to children at ‘gay pride’ parades should face trial for ‘homosexual vilification’ in the New South Wales Civil and Administrative Tribunal.

Click here to sign a petition asking the New South Wales Attorney-General to repeal laws that are now being used to protect dangerous sexually-explicit behaviour in the presence of children.