Who could possibly have guessed it?

The Catholic Church has decided to finally start teaching kids at Catholic schools about the Catholic faith. And all hell has broken loose.

The fun and games started earlier this month when the Australian Catholic Bishops Conference released a pamphlet titled, ‘Don’t mess with marriage’. It was distributed, funnily enough, in Catholic schools.

This is part of what it had to say:

“Indeed, in this pastoral letter we argue that what is unjust – gravely unjust – is:

As a statement, it is about as bland as they come.

In fact, I hate it. It implies, for a start, that there might come a time when marriage is not destabilised and that homosexual frolics can be safely recognised by Church and state.

But still, despite its sloppy language, it is a start. And a long overdue one. However, about a poofteenth of a second after it was released, the predictable reaction came.

For an unknown reason surely bereft all logic, ‘some’ parents who send their children to Catholic schools are ‘furious’ that their children are being taught the Catholic faith.

Actually, so far as I can tell, it is one parent in all of Australia. But who knows? In this age of madness there may even be a busload more.

Anyway, Canberra mum, Tanya Howell, summonsed up the courage to tell news.com.au journalist, Liz Burke, that she was shocked and dismayed at Catholic teaching in Catholic schools:

“I didn’t actually know what to say because I’m just shocked that in this day and age, knowing that they have children in that school who are gay people, that this sort of discrimination would be promoted,” huffed Tanya.

Tanya, please take chill pill. There is an easy solution to your problem. If you don’t want your children to be taught Catholic teaching, then send your children to a non-Catholic school. Easy.

Meanwhile, Georgia Simpson is not a poor, deluded mother of some poor, innocent child being taught the Catholic faith at a Catholic school.

No, Georgia Simpson is instead merely a student at a Catholic school. And, she’s in an emotional tizz about this as well. Which is probably why news.com.au investigative journalist, Liz Burke, has also covered her every sob:

“With many students at the school identifying as gay, including some of Georgia’s close friends, the teenager was so incensed by the “pastoral letter”, she “just wanted to do something about it”.

After receiving the 18-page letter on Thursday, Ms Simpson started a petition on change.org.

“Please remove the ignorant and anti-gay propaganda from circulation in Australian schools regarding same-sex marriage,” she writes in the petition addressed to the Catholic Church in Australia and Sydney’s Archbishop Anthony Fisher,” she wrote on the petition.

“The messages contained in the Don’t Mess With Marriage booklet are humiliating and degrading.”

Just so you know, Liz Burke is an unbiased reporter.

In fact, she even appeared on Channel Ten a few days ago to claim that the Catholic Church’s position was, of course, going to offend because it was ‘so far removed’. She also breathlessly recounted how the document asked readers to – gasp – contact their local politician.

Interestingly, Tanya Howell’s son is homosexual. His Facebook page has this to say about Liz Burke: 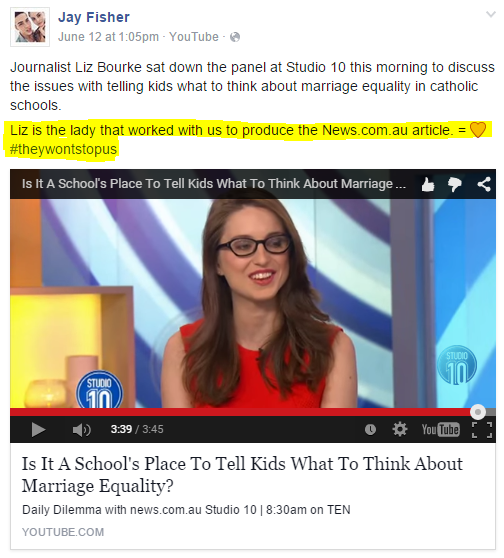 We’ll just wait now for Liz Burke to write an article questioning whether it’s appropriate for school kids to march along at the Mardi Gras. I’m sure that will happen any day now.

Obviously, #theywontstopus is all about stopping Catholic thought and opinion in Catholic schools.

This is illogical. It is insane. And it is dangerous.

Last time I checked, homosexual marriage was not legal in this country.

But here we have an organised campaign to force Catholic schools to teach non-Catholic ideas about homosexual relationships. Similar stories have been run by perthnow, Canberra Times, the Guardian, the ABC, and in regional newspapers.