Question: How do you get a bunch of spineless politicians to heap praise on Islam?

Answer: Have a 15 year old shoot a police officer in the back of the head and then dance about while yelling ‘Allah akbar’.

And that, pretty much, sums up what has happened over the last few days.

It all started on Friday morning. That’s when The Australian trumpeted that new Prime Minister, Malcolm Turnbull, was leading us all to the land of milk and honey and a warm and fuzzy relationship with the Islamic community.

The Islamic community is also known as that radical section of society from which the Islamic State recruits more soldiers than the Australian Defence Force. The common characteristic of the proud members of the Islamic community is that they all believe that Mohammed, a ‘prophet’ who ordered the beheading of an entire Jewish tribe, is the world’s greatest man. Greater even than Saint Malcolm.

Anyway, this is what the front page of The Australian looked like last Friday: 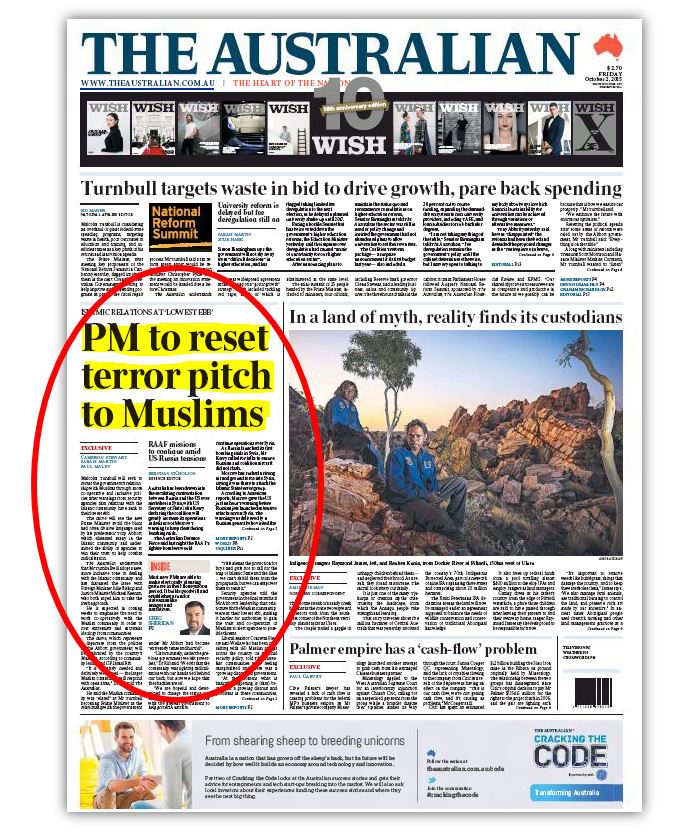 And this is how the leading story of the day began:

Malcolm Turnbull will seek to recast the government’s relationship with Muslims through more co-operative and inclusive policies after warnings from security agencies that relations with the Islamic community have sunk to their lowest ebb.

Our Prime Minister is seeking to cosy up with the mob that have a difficult relationship with Australia’s security agencies. Who could possibly guess why that might be?

Most Australians would be bemused by this: after all, exactly why would you want to appease a minority that views our security agencies as the enemy?

Prime Minister Malcolm “Neville-Chamberlain-was-a-good guy” Turnbull can probably answer that question better than I can.

Anyway, the article went on to say:

The move, which represents a departure from the policies of the Abbott government, will be embraced by the country’s Muslims, according to community leader and GP Jamal Rifi.

“It is definitely needed and definitely welcomed — the larger Muslim community will respond with open arms,” Dr Rifi told The Australian.

He said the Muslim community was “elated” at Mr Turnbull becoming Prime Minister as the relationship with the government under Mr Abbott had become “extremely tense and hurtful”.

So on Friday morning the Islamic community was all open arms. And the next day the Weekend Australian reported how this went down. This is the front page: 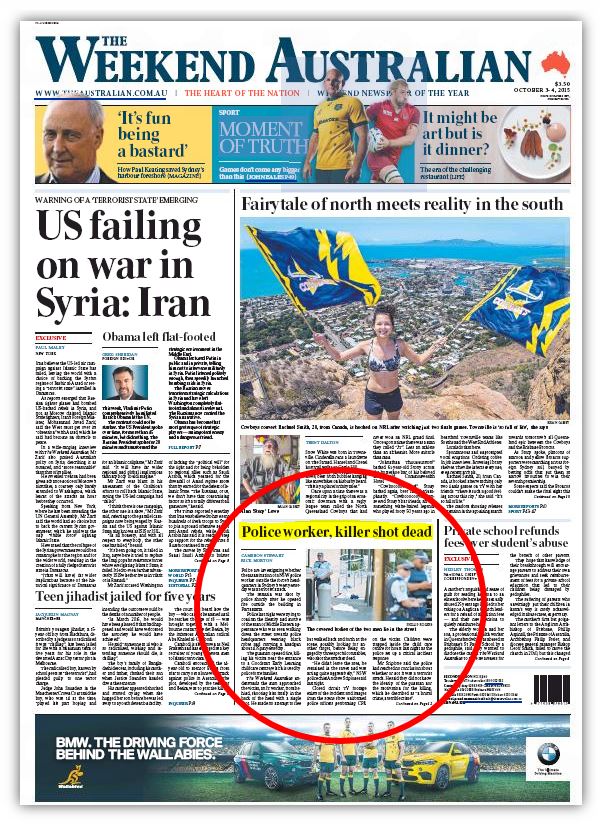 That’s right. We now know that a police worker was shot dead. By an Islamic terrorist. In Parramatta. And on the way to jihad, he stopped in for a visit at the local mosque.

Now there’s an interesting social impact assessment for Bendigo and any other city unfortunate enough to be grappling with a development application for an Islamic ‘place of worship’.

While Farhad Khalil Mohammad Jabar was at the Parramatta mosque, an alleged bastion of ‘moderate’ Islam, he was also reportedly geed up by Islamic State sympathisers, Hizb ut Tahrir. This peaceful, democratic organisation also happens to have links to Man Haron Monis, of Lindt Café massacre infamy.

You know, not even I could make this stuff up if I tried.

So let’s recap the situation.

On Friday, the Prime Minister reset the pitch with Australia’s Islamic community. The message was sent out from on high and hit the front pages and talk back radio lines. And by the end of the day, Malcolm Turnbull was dealing its effects: a dead New South Wales police worker and Australia’s first terror attack in the age of Islamic tolerance.

As far as policy changes go, it seems that this one had an immediate bang for buck.

As such, it’s probably truthful to describe it as a radical departure from previous policy settings. I’m not so sure, though, that The Australian was best served by the use of the word ’embrace’. However, this newspaper does seem to be spot on describing the elation that the followers of Mohammed have in Malcolm.

The day after the attack, Malcolm Turnbull had this to say:

We know that’s what he said because it’s proudly up on his website.

Instead of doing the ring around with Islamic community leaders, Malcolm really should ponder the only fact of critical importance: efforts to collaborate with the Muslim community are what has been utterly counterproductive. Collaboration has seen three terrorist attacks in a year and dozens more arrested.

Just imagine how violent Australia would be if we had good relations with Islam.

Unfortunately, it gets worse. Turnbull is not the only political leader with a few kangaroos loose in the top paddock over Islam.

Still, that hasn’t stopped the new ‘moderate’ Liberal Party from deciding that after this shooting a ‘conciliatory‘ tone is required in order ‘not to inflame tensions with the Muslim community‘. Normally, you’d expect such statements if it had been reported that some peaceful imam had been roughed up by a rampaging horde of white, Aussie males on their way to sprinkle bacon bits across Lakemba. But no. These statements come after a boy, whose only noticeable change over the past year was that he became a more devout Muslim, executed a police civilian in the name of Allah.

I don’t think so sonny. Get on ya bike and take you moderate rubbish with you. We don’t need it.

And if all of the above isn’t enough evidence to demonstrate that the political class has lost the plot, this tweet will be lost on you. Which is a pity – it simply takes the cake:

Shorten: Our thoughts are with the family of a 15-year-old alleged perpetrator. #ParramattaShooting

Right there, in less than 144 characters, you have everything that’s wrong with our parliamentary representatives and the media. The politicians and the journalists, with very few exceptions, believe that Islam is part of the solution to terrorism. They’re dead wrong. Islam and terrorism go hand in hand. And when it comes to dealing with terrorism, the major parties are hand in hand too.

More and more Australians, regardless of where they stand on the political spectrum, understand this very well:

#auspol #abc730 The attack on Bendigo this weekend by far right groups is Abbott’s hate child. Turnbull and Shorten could end it. — Prince Fed up (@somuchbullsh) October 5, 2015

.@OzEquitist well now you have Turnbull and Shorten reading from the same ALP / ABC hymnbook. Enjoy the break.

Sick of Leftists like Shorten and Turnbull? : The Rise Of The Australian Liberty Alliance : http://t.co/yMAzfZ1OZL pic.twitter.com/sFQDcGbTnH

So the message is clear: if you want to change this situation, you can no longer afford to think that the Liberals will clean up Labor’s mess. They are both wallowing in the same pool of mud.

That’s why, on the same weekend that Labor Leader, Bill Shorten, extended sympathy to the family of a terrorist, the story broke that the Liberal government may deny a visa to Dutch politician, Geert Wilders. His crime is to oppose Islam and so, under Turnbull and Co, Wilders has been labelled a dangerous extremist. He may be denied entry to Australia, while the Islamic community will get the Prime Minister’s phone number.