The Chief of Navy’s Islamic solidarity

You will, no doubt, be extremely pleased to know that the Chief of the Royal Australian Navy, Vice Admiral Tim Barrett AO CSC, recently fasted in solidarity with Australian Catholics for Ash Wednesday.

The good Admiral did no such thing. At least, I can’t find any reference in any Navy publication stating that he did. For what it’s worth, I can’t find any Catholic organisations calling on him to do any such thing either. And I would hate to defame the good Admiral by giving the impression that he has gone out of his way to show solidarity with Catholics. He hasn’t. Instead, Vice Admiral Barrett is content to let his sailors participate in an event that the Australian Defence Force acknowledges vilifies Christianity.

On the other hand, Vice Admiral Barrett has gone out of his way to show solidarity with Islam.

Islam is the only religion that Vice Admiral Tim Barrett publicly participates in, according to Navy publications. He did so this year when he fasted in solidarity with ‘Muslim-Australians’, as he calls them, and rocked up to the Australian War Memorial to praise this ideology. 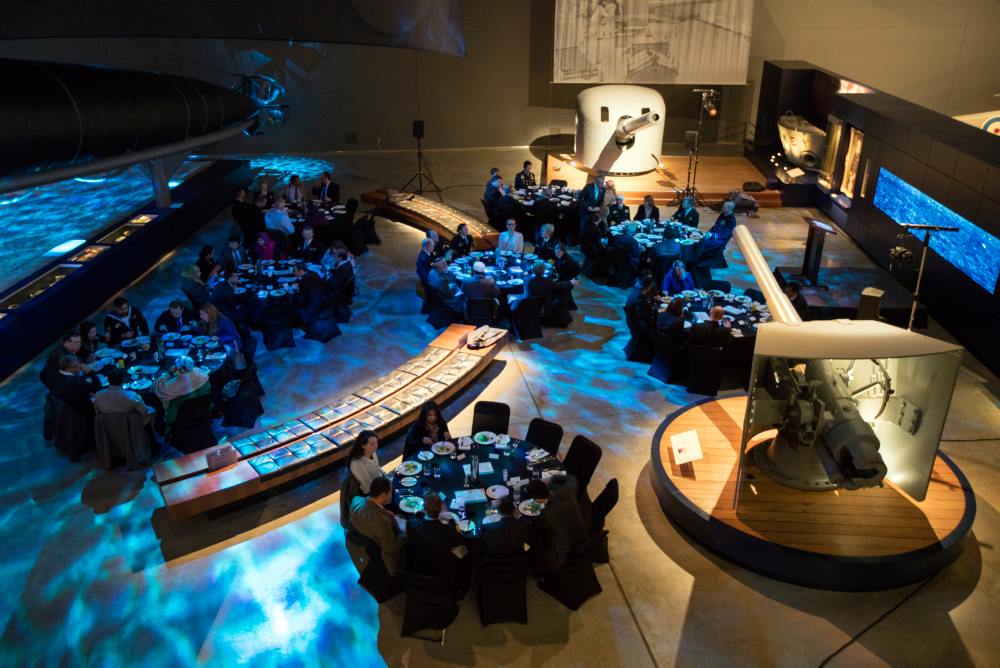 The Royal Australian Navy held a dinner to celebrate the end of Ramadan for the first time in 2015. It was held in the Anzac Hall at the Australian War Memorial. I’m sure no offence was meant. After all, the Anzacs were fighting the Islamic caliphate.

This is how Vice Admiral Barrett describes his participation in Islam:

I am delighted to be able to host this Inaugural Navy coordinated Iftar. I have fasted today in solidarity with you all, to properly immerse myself in the experience and purpose of Ramadan and to gain an appreciation of the challenges and rewards Muslims experience during this important month in the Islamic calendar.

Vice Admiral Barrett then went on to state:

“Muslim-Australians and the knowledge and the values they bring to the workforce are a key and essential component of a successful Team Navy.”

If Muslim-Australians are essential to Team Navy then we have a serious problem. Unfortunately for Team Navy, the vast majority of Muslim-Australians who are interested in the military have already shipped off to Syria to fight with the Islamic State. So maybe, on second thoughts, Muslim-Australians are not so essential for our maritime capability. And what’s so wrong with saying that? After all, the Department of Defence released a report last year pretty much saying the same thing. Except it was focused on Anglo-Australian males. It stated they were undesirable.

Regardless, it seems the Army agrees with the Chief of Navy’s sentiment about Islam. So much so that senior officers now think that it’s policy to allow soldiers to participate in events that denigrate Christianity, but not Islam, as shown by this excerpt from an Australian Defence Force report written in mid-2013.

That all sounds very diverse. And this is the kind of diversity that is here to stay.

In fact, Vice Admiral Barrett announced from the Australian War Memorial that the Navy is intent on representing the full diversity of the Australian demographic by 2030.

Not only is this a stupid thing to say (will the Navy soon have children, the blind and the elderly?) but it’s also dangerous. After all, the fastest growing demographic in Australia is the growing number of Muslims who have signed up to support the Islamic State. Will they get a gig too?

Yes is probably the answer.

We know this because, by sheer dumb luck and good fortune, Australia is not so far down the path of lunacy as the UK. And in the UK the military has already resigned itself to the fact that it will be infiltrated by Islamic State supporters.

You can bet your bottom dollar that Australia’s military will face similar threats as well, especially given that the Chief of Navy is prepared to say things like this:

“…I, and my successors as Chief of Navy, will continue to need guidance to ensure that what should be done by Navy to meet the legitimate religious needs of those members of the Islamic faith is done. Henceforth Navy will always need advice on how to be an inclusive recruiter and employer of choice for those Australians who profess Islam.”

The Chief of Navy might do well to remember that the Army has already been embarrassed by Islam. Australia’s first suicide bomber was an AWOL Muslim soldier and he did us all a favour early last year when he went out with a bang in Syria.

There are a couple of other clangers worth noting from Vice Admiral Barrett’s speech and this whole shebang promoting Islam at the Australian War Memorial.

He claims the Australian Defence Force’s Guide to Religion and Belief contains a great deal of information. That’s more than a little off the mark. It has two glossy pages about Islam. That’s all. And while it does say that Muslims strive to follow Mohammed’s example, his example has been left out. All of it.

None of this is in the guide that Vice Admiral Barrett speaks so glowingly about at a dinner in which he praises Islam. That’s probably why he turned up: he simply has no idea what he is doing.

That would be excusable if he was just a sailor. But he’s not. Barrett is commanding the Royal Australian Navy at a time we are at war with the Islamic State. No wonder victory seems so far away.

Fortunately, Vice Admiral Barrett was there to hear the Grand Mufti speak from the hallowed halls of the Australian War Memorial. He told us all that Muslims donate money at the end of Ramadan and that this goes all over the world.

Isn’t that nice to know.

If I was the Chief of Navy I’d be a little peeved about this. After all, the Grand Mufti of Australia breezily announced the flow of Islamic funds out of Australia at a dinner he organised in Islam’s honour at the Australian War Memorial.

But now that the Grand Mufti’s let this little cat out of the bag, he might like to explain exactly where this money goes. After all, Islamic charities in Australia are funded by halal certification paid for by you and me. And it would be really embarrassing if this was used to raise funds that end up in the hands of the Islamic State.

Actually, it would be really embarrassing if these funds ended up at the local Parramatta mosque as well, but that’s a whole different story.

Finally, it’s worth noting that since the Islamic State kicked off its little campaign of world conquest, the Royal Australian Navy has released Islamic uniforms and now commemorative coins that have Navy values on one side and the words, ‘Ramadan Mubarak’ on the other. In addition, the Chief of Navy is fasting in solidarity with Muslims and attending Islamic feasts at the Australian War Memorial.

Somehow, I get the impression that it doesn’t matter what our military does in Iraq and Syria. The Islamic State has already won the cultural war. 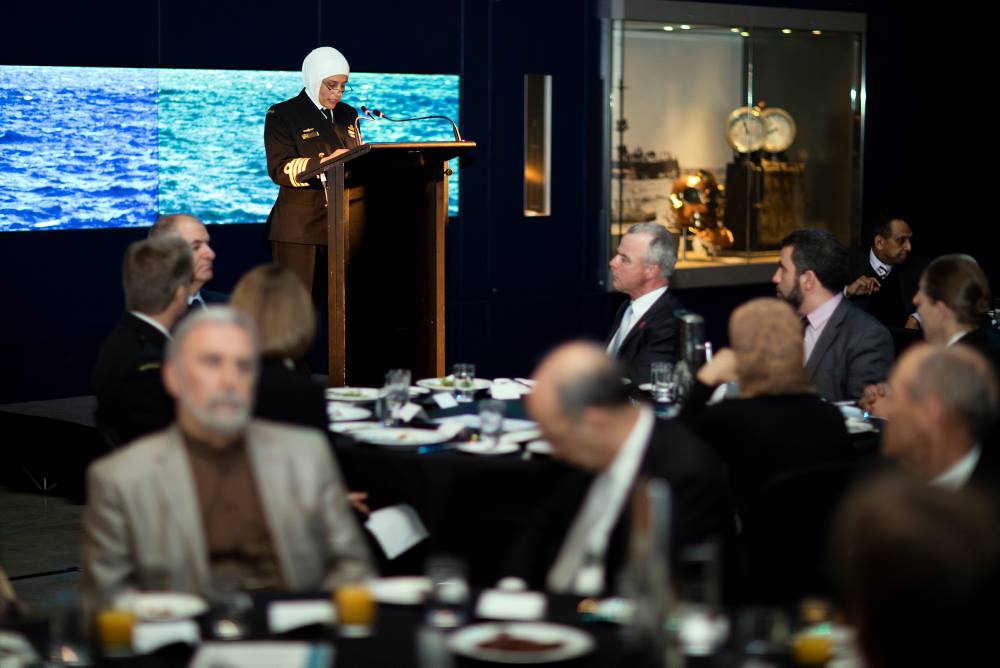 Captain Mona Shindy addresses the inaugural Iftar Dinner at the Australian War Memorial. And yes, she is wearing the uniform of the Royal Australian Navy.