The President of France has said this is war.

Prime Minister Turnbull stated that it looks like war.

Even Australia’s security agencies are talking openly about an insurgency for the first time. Maybe they have been reading my articles.

Yet for all the words, there is no action.

And there is no action because the words being flung around are meaningless.

There is no point declaring war if you still won’t name the enemy.

There is no point claiming that an insurgency is underway in Australia if anti-discrimination laws and official government diversity programs are actually funding, aiding and abetting the enemy.

There is no clearer sign that our government is as useless as a peace sign in Raqqa when it comes to fighting Islamic terrorism than the words today uttered by our Attorney General, George Brandis.

After the Paris terrorist attacks, George Brandis claims that the worst possible thing we can do is alienate the Islamic community. This is what he said:

“The worst thing we could do is to alienate the Muslim community; they are our fellow citizens and they are our necessary partners in combating this menace.”

That’s not the way I see it.

The worst possible thing Australia can do after Paris is ignore the facts, ignore the reality and ignore the danger. Ongoing wilful and deliberate ignorance is the worst thing we can do because it will lead to the same result as Paris: dead people in the streets.

This whole focus on reassuring the Islamic community that we are on the same side has now become a deadly farce.

We are not on the same side and it’s not because I say it. It’s because the Islamic community says it.

The Grand Mufti says it. He is the one that is proud to go on the public record and even write to the Senate to explain that laws outlawing the advocation of terrorism infringe his community’s religious freedom.

Thanks to the Grand Mufti, there is no excuse for us not to know that advocation of terrorism is part and parcel of the Islamic religion.

The Grand Mufti has also gone out of his way to publicly defend Hizb ut Tahrir – the organisation that has openly and vehemently rejected our values, our laws, our heritage, our anthem and that has even called for an Islamic army to impose Sharia law in Australia.

Yet this is where the Grand Mufti’s allegiance lies.

That is why after the Paris terrorist attack the Grand Mufti issued a press release. And instead of condemning terrorism, the Grand Mufti has laid the blame at our feet, even criticising ‘military intervention’. If we listen to the Grand Mufti, we’ll bring the boys back home now from the war against the Islamic State. 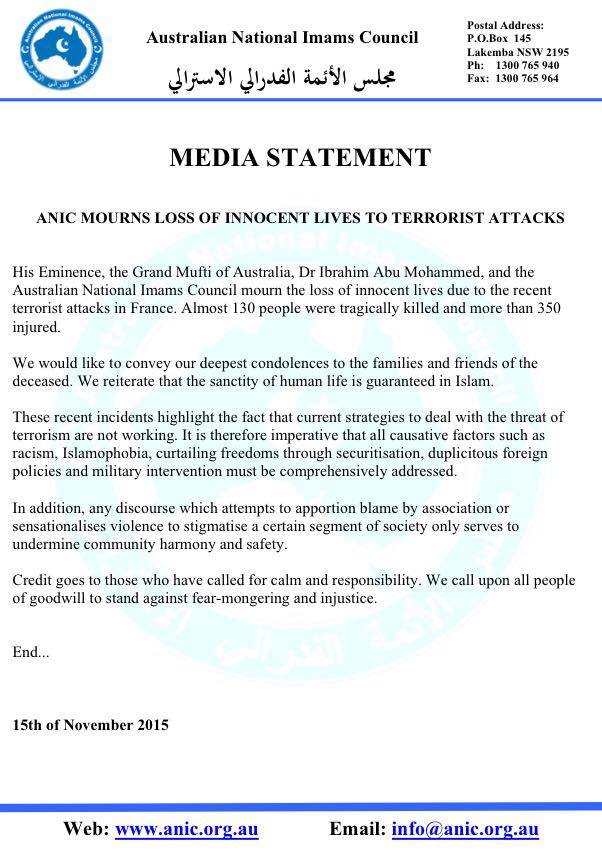 The Grand Mufti does not want to stand against terrorism. After Paris, he wants us to stand against the ‘injustice’ of Islamophobia, which he dares to term a ‘causative factor’ of the terrorist attack in Paris. As always, the Islamic community blames us for the violence wrought by those who cry Allahu Akbar.

When people are dying in the streets as a result of Islam, one can be forgiven for being a little apprehensive about this religion. Islamophobia is the perfectly logical response to Islam: after all, Islam kills.

The Grand Mufti, Islamic organisations and the Islamic community in general have made it very clear over and over again: they are deliberately alienated from Australian society and they have no intention of changing anything, other than our laws and culture so that they are subject to Islam.

As such, George Brandis’ words are disgraceful and he should go. He’s not interested in saving the lives of Australians. He’s interested in protecting a community that has more of its sons fighting for the Islamic State than the Australian Defence Force.

As the Australian Liberty Alliance Senate candidate for Queensland, I am proud to give this guarantee: I will not appease Islam to win brownie-points with the progressive left. I recognise that Islam is the cause of the threat we are facing and if I am elected, I will take action to address that threat and protect all Australians. 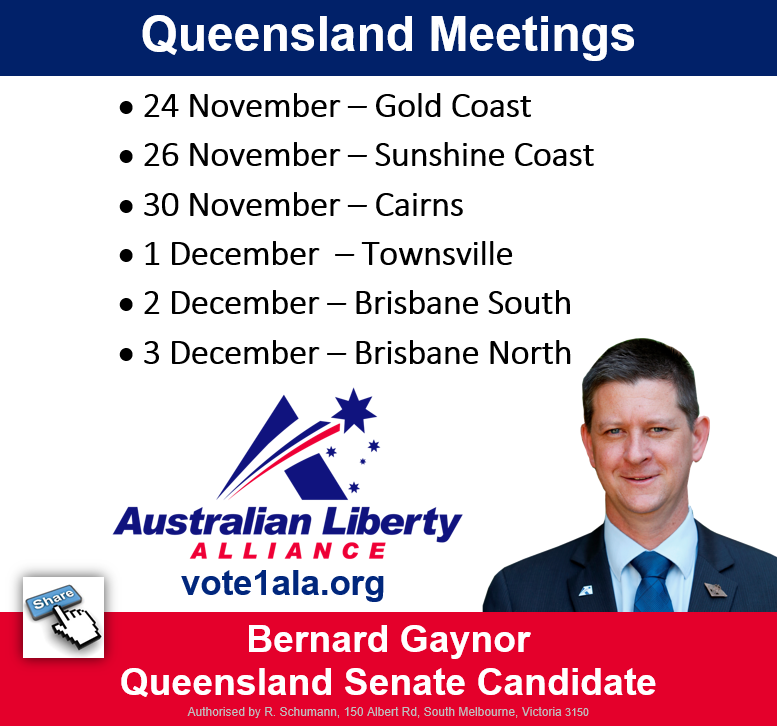 Further details of upcoming Australian Liberty Alliance meetings in Queensland can be found here. Venues will be finalised shortly based on attendance numbers. Venue details will be emailed to all who register once they are confirmed.