They say that hell hath no fury like a woman scorned.

Well, actually, William Congreve said that. You can see a picture of him below. 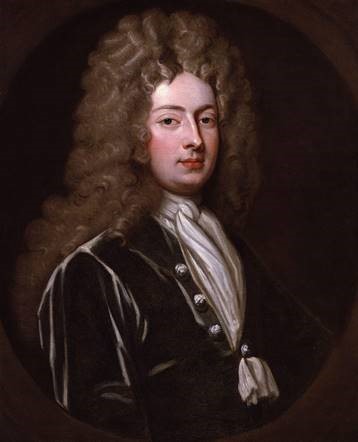 The phrase, ‘hell hath no fury like a woman scorned’ is derived from William Congreve’s 1697 play, ‘The Mourning Bride’.

Anyway, on Australia Day, McGregor had a hissy fit. I guess you could say that he believed that he felt like a woman scorned.

He wasn’t happy that Morrison was announced as Australian of the Year instead of him. This is how it was reported by the Star Observer:

“I felt sad for two reasons, one was I like to win things,” she said.

“I felt really sad that they (National Australia Day Council) did not have the courage to go with an LGBTI person.

“I thought it was time… it was a weak and conventional choice.

“I think I’ll die without seeing a trans Australian of the Year and I think that’s terribly sad.” 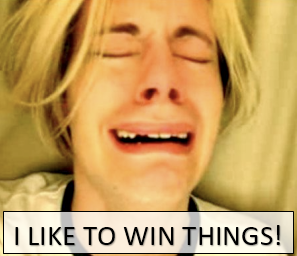 Cate McGregor, apparently, gets upset if he doesn’t win things.

Funnily enough, the rest of Australia felt the same way as McGregor regarding the announcement of David Morrison as the 2016 Australian of the Year. It was just for different reasons.

Australians don’t want Morrison because he’s a hectoring hypocrite who lives in the delusional bubble of the bleeding hearts and is riding the politically-correct gravy train for all its worth. To use McGregor’s words, he is a weak and conventional choice.

He is exactly the kind of person you’d expect the latte-sipping chattering classes to anoint.

So here we go again with another activist ready to take another year to tell us all that we’re wrong and evil and need to amend our ways.

Men are thugs unless they wear a ribbon.

White guys are racist unless they wear a ribbon.

Perpetual Apology Day should be every day.

And Islam is persecuted in this country.

McGregor, unlike other Australians, is upset over Morrison’s accolade because he thinks Morrison is weak and conventional in a different sense. From the perspective of an ultra-radical social activist, Morrison is so 2012.

As a result, McGregor cracked it because Morrison is too conservative, too normal, too staid.

In other words, McGregor wants the Australian of the Year to be a person who does even more hectoring and lecturing at the rest of us. And he wants it to be him.

If you could graph this situation, it would look like something below: 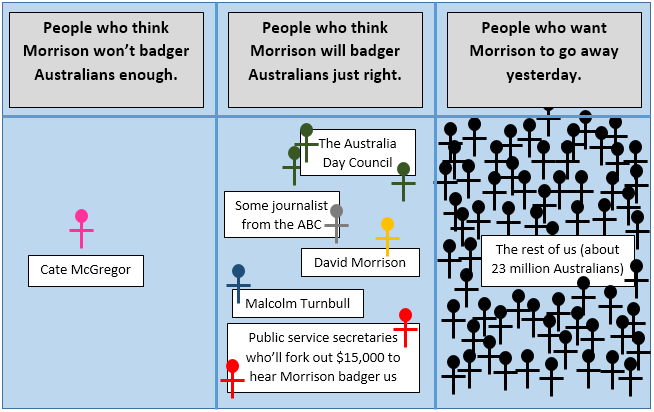 A graphical representation of where key Australians stand on the appointment of David Morrison as the Australian of the Year.

As such, one can logically surmise that McGregor’s feel for the vibe of this nation is a tad off the mark.

That’s why it was so interesting to see that the Daily Telegraph has picked up McGregor as a political columnist. I can’t wait for the laughs.

And the first has already arrived.

For some reason, McGregor is fixated on the Australian Liberty Alliance. I can’t think why.

His first piece was all about how the Australian Liberty Alliance is not a threat at the next election. And who knows, he may be right. Australians will certainly make that choice.

But it does seem oddly strange that McGregor would choose to use his first piece to write off a party that he considers to be on the fringe and a minor bit-player in the world of minor-party politics.

He even asked former Prime Minister, Tony Abbott, to comment on this story that, apparently, isn’t important enough to be a story at all.

This is part of what McGregor wrote:

One who understands how right wing fringe parties can exploit the legitimate community anxiety about Islamic extremism is former Prime Minister Tony Abbott.

He was one of few senior Liberals who recognised the threat that Pauline Hanson posed to the Howard government between 1996 and 1998 and he is monitoring the proliferation of right wing micro parties seeking to exploit fear of Islamic extremism.

Abbott told this column: “At the moment no serious senior conservative figure has come out and demanded the formation of a new political party to combat extremism. So for the moment I am not too concerned that parties like the Australian Liberty Alliance will make significant inroads into our base.”

I think Abbott said something about how he was not too concerned that Turnbull would make significant inroads into his base the day before he became an ex-Prime Minister.

McGregor went on to state:

As Turnbull grapples with how to achieve tax reform, maintain border security and contribute to the Long War in the Middle East, he may draw encouragement that his predecessor is committed to the re-election of the government and is lending no moral authority to any insurgency on the Coalition’s right flank.

The title of the article was, ‘Why Malcolm Turnbull needs Tony Abbott’.

And there you have it.

McGregor is about as extreme as can be when it comes to social politics in this nation. And in his very first piece on politics for the Daily Telegraph he’s let the cat out of the bag.

The radical left want conservative voters, and Tony Abbott, to stick with Turnbull.

Because under Turnbull, they’ve got a ‘conservative’ left wing government. The last thing people like McGregor want is to see the Australian Liberty Alliance upsetting the applecart and leading a fightback against all the radical nonsense that they push.

In a strategic sense, it really doesn’t matter to them whether it’s Turnbull or Shorten after the election because they’re both headed in the same radical direction. One is just jogging, while the other is sprinting. But they’re both on the same path.

And, as history shows, the conservatives within the Liberal Party don’t have the numbers. The game is up. Now they’re simply propping up Turnbull, instead of leading a conservative counter-offensive. That is one reason why so many ex-Coalition members and voters have flocked to the Australian Liberty Alliance.

I could see the writing on the wall inside the Liberal Party years ago. And the revolution really flowered in many ways under Abbott, not least of all during his demise. Proof of how far the Liberals had wandered left came when Abbott, derided as the most conservative Prime Minister ever, baulked at repealing Section 18C of the Racial Discrimination Act 1975 shortly after the election.

Remember, Abbott announced that he’d reneged on his promise to Team Australia in order to keep Team Islam onside.

That is why so many conservative voters left the Coalition even before Abbott was ousted.

And I’m not so naïve to believe that the next election will be easy. The Australian Liberty Alliance has a long way to go before it can be confident of success. It will also need to earn the trust of Australians before they grant it any role in government.

But I am heartened by the groundswell of support the party is receiving. It gives me great hope that Australians are willing to rally and save their country. I am also heartened by the growth of similar parties in Europe. Geert Wilders launched the Party for Freedom in 2005. It is now the most popular political party in The Netherlands.

This shows that with hard work, determination and courage, the Australian Liberty Alliance can appeal to Australians in large numbers as well.

The next election will simply be the first of many tests for the Australian Liberty Alliance. I will certainly be doing all I can to make it a successful one because I believe that Tony Abbott is partly right. No serious conservative figure in the mainstream of the largest conservative party has stood up to Turnbull and the ideas he promotes and I doubt they ever will be able to now. It’s not that they’re unwilling. It’s that the Liberal Party as a whole is no longer conservative.

Australia cannot afford for this situation to continue if it wishes to maintain its prosperity, culture, heritage and safety. That is why this work will need to be done from the outside of the Liberal Party, starting with the Senate. Importantly, if the Australian Liberty Alliance can win Senate seats it will provide political room (and confidence) for the conservative elements within the Coalition to operate in. In other words, electing candidates from the Australian Liberty Alliance to the Senate will be the best way of re-strengthening the Liberal Party. An attack from the flank is the only way to force the Liberal Party to again embrace its conservative roots.

In the meantime, McGregor can scorn us all he likes and the political class can ignore us at their own peril. The Australian Liberty Alliance will simply continue to listen to the concerns and worries of ordinary Australians and do all it can to represent them.