The statement outlining the reasons for his dismissal listed a number of factors, including that Quaedvlieg ‘acted to modify policies’ to ‘advantage, at least in substantive part, a particular candidate for ABF employment’.

That ‘candidate’ just happened to be his girlfriend, hence the angst, investigations and loss of a $600,000 plus job.

This statement will not just be interesting reading for Quaedvlieg, but also for the Senior Sirs at the Australian Defence Force.

There is a similar scandal burning furiously within the bowels of Russell Offices.

And the questions and heat are now turning towards the Vice Chief of Defence Force, Ray Griggs.

Last night, Griggs strode onto a stage at the Australian Command and Staff College and addressed the best and brightest up-and-coming officers in the Australian Defence Force.

Griggs has trodden this path since 2015. It is familiar territory for him, although it has not always been comfortable.

Three years ago his address came as rumours swept through Canberra that Griggs was having an affair with a far junior naval officer. Defence policy at the time clearly prohibited sexual relations in the command chain. Many attending Griggs’ presentation held the view that every Defence member, apart from the Chief of Defence Force, was subordinate to him.

So he was questioned about his personal circumstances.

Those attending that brief came away with the very strong impression that the Vice Chief of Defence Force had given the green light to sexual relationships within the command chain.

In fact, that is exactly what he has done.

Whatever happens with Ray’s future, he will forever be remembered as the man who changed Defence policy to make it lawful and acceptable for an admiral to run off with a sailor’s wife.

He has done this in two ways.

Firstly, he ran off with a sailor’s wife.

And, secondly, he has put his signature to policy changes that not only make this acceptable, but that also protect such relationships under the guise of ‘anti-discrimination’ measures.

In the space of four years, the Australian Defence Force has gone from an organisation that prohibited sexual relationships within the command chain due to their ability to impact on command, morale and discipline to one that shields them.

And these changes have been wrought by the man who just so happened to be in a relationship with a junior officer. That’s why those words in the statement outlining Quaedvlieg’s sacking, ‘acted to modify policies’, may soon be felt inside Defence.

A relationship which involves sexual relations or private intimacy, such as between husband

and wife, life partners, boyfriend/girlfriend etc, where a superior and subordinate command or management relationship exists, is considered to be inappropriate in the workplace.

On 24 November 2017, this policy was cancelled and replaced with a new one, Interim Defence Instruction Personnel 35-3 Required behaviour in Defence.

It removes all references prohibiting sexual relationships within the command chain.

Instead, the policy dictates that the definitions of unacceptable behaviour are detailed in a second document, Complaints and alternative resolutions manual. This document also fails to prohibit sexual relations in the command chain. However, it does contain this statement:

It is unlawful to treat a person less favourably at work because of a person’s:

With the stroke of a pen, Griggs ended the prohibition on sexual relationships between subordinates and commanders and instead made it unlawful to treat a person less favourably because of their relationship status.

You can see Griggs’ signature on the front page of the new policy document below: 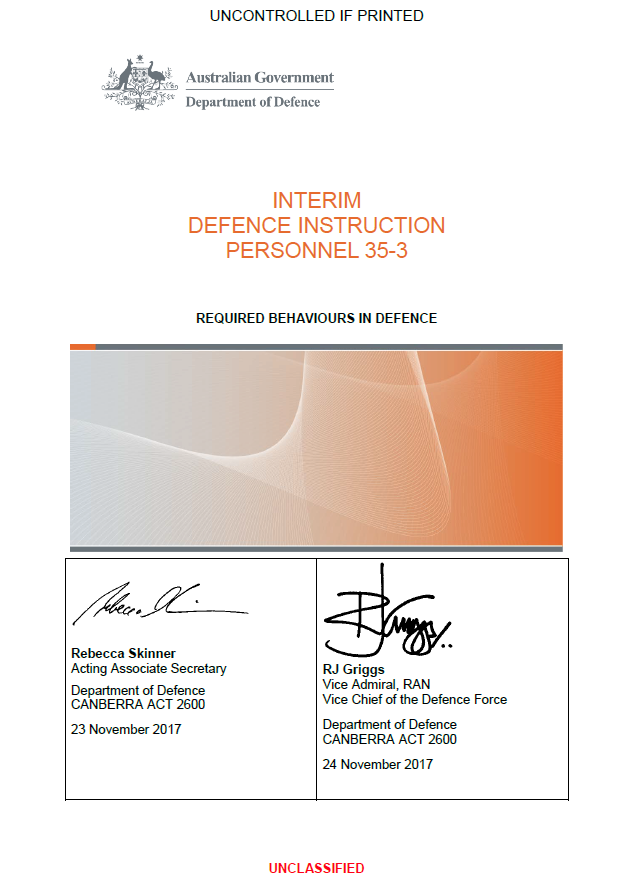 This, seemingly, will be news for the Chief of Defence Force, Mark Binskin. Last month he told Senate Estimates that relationships within the command chain were prohibited:

Air Chief Marshal Binskin: There are policies in place, and I won’t go through all of the policies. But, basically, if there’s someone in your command chain, then the policies are quite strong in those particular areas. I think that’s where you’re going.

Senator PATRICK: Yes. In principle, how is that normally handled?

Air Chief Marshal Binskin: I’ll get you the—

Senator PATRICK: There’s a DI(G) PERS on it or something, isn’t there?

Air Chief Marshal Binskin: Yes, there is, and I don’t have the policy and the PERS in front of me. I’ll get the personnel folk back to take you through it. But, in general terms, there are policies in place in regard to people in a command chain. You don’t want to have, in a squadron or on a ship or in a unit, a relationship there between a subordinate and a senior person. I won’t even say the commander, but I would just say in that command chain

At the time the Chief of Defence Force spoke those words it had been 96 days since the policies he referred to had been cancelled by his 2IC.

Of course, Senate Estimates was also told that a number of investigations into Griggs had cleared him of any wrong doing. But Senate Estimates was not told what the terms of reference for those investigations were or who was called as a witness. Furthermore, even though the legislation surrounding such inquiries requires Defence to compile an annual report, I can find no such report anywhere.

The investigations into Quaedvlieg uncovered more than 14,000 emails and text messages between him and his girlfriend. This investigation had teeth and could go digging for proof of a conflict of interest. We have no way of knowing whether any of the investigations into Ray Griggs went into this level of detail. In fact, according to media reports, it appears likely that he was simply asked if his relationship started while he was Chief of Navy and he said no. Ray’s word was then accepted over that of his ex-wife, despite the poetic evidence to the contrary.

And this raises questions because of what we do know.

We do know that Ray Griggs’ newest and fourth wife, Chloe, was promoted rapidly (being elevated to ‘Temporary Commander’ in three years and nine months). We also know that Navy policy stipulates that it takes four years, at a very minimum, for promotion from Lieutenant Commander to Commander.

It also seems that a new position was created which allowed her to move from a Reserve contract into full time role.

And now we know that Ray has changed Defence policy in such a way as to seemingly protect his own relationship under anti-discrimination measures.

In these circumstances, one can only expect penetrating scrutiny of Griggs in the weeks ahead. The removal of Roman Quaedvlieg will only intensify the requirement for this.

Which brings us to accusations of hypocrisy.

It may be pertinent that Griggs has done much of the running on the Defence Force’s inclusion and diversity policies: such as allowing serving personnel to march in uniform in the Sydney Mardi Gras – not a favourite with many in the military echelon.

She then went on to speculate that this, rather than Griggs’ behaviour, was behind the scrutiny of this affair:

So many people with potential agendas. So many potential conflicts of interest which may, or may not, have coloured the way the controversy has played out.

It would be no more than a short-term controversy, stoked by some salacious detail, if there were not some bigger picture issues involved.

And it prompted this from Mike Carlton:

I know Ray Griggs. He is an officer of the utmost integrity and a powerful force for cultural change in the navy and the ADF. He does not deserve this crap. https://t.co/1x5dA3kAqb

Strangely, Mike Carlton also had this to say about Barnaby Joyce:

The Beetrooter survives another day. But anyway you cut it, he is damaged goods. Australians don’t give a stuff about his sex life. They loathe the trickery, the jobbery, the weasel words, the oafish sense of entitlement.

There is no doubt that Griggs is a politically-correct loser. He set up Mona Shindy and gave the go ahead to her official Islamic Navy Twitter account that trashed the apolitical standing of the Australian Defence Force. He also enthusiastically champions uniformed participation in the Mardi Gras which does the same and is set for the same fall. And he’s backed Defence-funded sex change operations. This has angered many, as has Griggs’ example. But it’s the impression of weasel words, trickery and jobbery and the oafish sense of entitlement that his supporters like Mike Carlton should be worried about.

As I’ve said in the past, Griggs has not shown the same type of hypocrisy as Barnaby Joyce. Joyce failed to live up to high standards, whereas it’s hard to see that Griggs has any at all. But it appears that because Griggs is the headline act in the ‘cultural change’ programs underway inside Defence some in the media believe he should not be subject to the same scrutiny over his affairs as others.

It shows that when it comes to hypocrisy, the ‘progressives’ take the cake. They don’t believe in equality at all but in blatant double standards that protect their own.

And that shoe will fit until the following questions are answered in relation to Ray Griggs. They were certainly the type of questions asked of Roman Quaedvlieg but we don’t even know if they have been put to the Vice Chief of Defence Force:

If you can assist in answering any of those questions, please contact me.

So far, it seems no one within the senior leadership group can be accused of doing that. Meanwhile, the Minister for the Politically-Correct Defence Force remains silent. And Defence remains hiding behind a number of investigations that it won’t even release to the public – even though the legislation empowering these inquiries enables them to be made public…

This article originally stated that Navy records showed Chloe Griggs had been promoted to Commander in early 2014. Defence has subsequently informed this website that although the Navy website gave the impression that Chloe Griggs was a Commander in 2014 this is incorrect. Chloe Griggs was promoted to ‘Temporary Commander’ in September 2015, three years and nine months after becoming a Lieutenant Commander. The Navy webpage has now been amended and I am happy to correct the record here as a result. More details here.