Kind of getting closer to the truth

Home » Defence » Kind of getting closer to the truth

This webpage is a stickler for the truth.

And it had published that Chloe Wootten (now Griggs) was a Commander in the Navy on 13 January 2014.

That’s because that’s what the Navy webpage said. See: 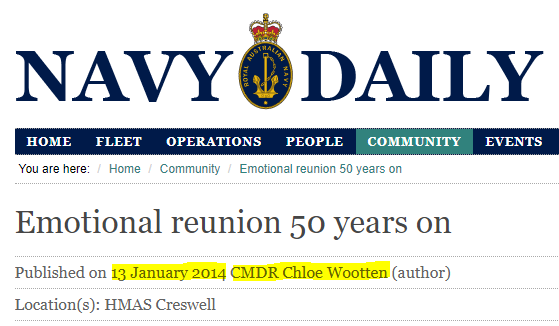 So I was surprised when Defence informed Senate Estimates that Chloe Griggs became a ‘Temporary Commander’ on 18 September 2015. See:

And I was even more surprised, when I went back to the Navy webpage, to find that Chloe’s rank at 13 January 2014 had been amended. See:

So I asked Defence what this was all about. And this is what a spokesperson told me:

The promotion timelines outlined in Defence’s recent response to Senate Estimates questions on notice are correct.

As is the case with many websites, Navy Daily articles are often linked to the author’s profile in the website’s content management system. The way the content management system changes were implemented when Commander Griggs (then Wootten) was promoted resulted in previous article by-lines linked to her profile being overwritten with her new rank.

Defence understands assumptions made in this case may have contributed to inaccuracies in media reporting or online articles. To prevent further misreporting, the by-lines of Commander Griggs have been updated to reflect her rank over the period in question.

That sounds a lot like Defence is correcting ‘inaccuracies’ on its website. Which is nice because it has publicly had a go at this website for its ‘inaccuracies’.

However, although I accept Defence’s explanation and do not believe there has been any nefarious attempt to cover up promotion dates, it is also important to point out that this new information does not change anything.

This website’s main point still stands. Ray Griggs was unfit to be Chief of the Defence Force because of his inability to put the welfare of Defence families before his own desires.

And Chloe Wootten still received her Commander’s slides far quicker than others and well and truly before she had served four years as a Lieutenant Commander. Navy policy is that four years time in rank is required before promotion.

Further, Defence’s continued claim that Ray Griggs did not fundamentally amend Defence policy is a lie. Before he was Vice Chief of the Defence Force there was a policy prohibiting sexual relations within the command chain. Now that policy is gone.

And it has been replaced by a new one signed by Griggs’ own hand which expressly allows such relationships.

Defence might be correcting inaccuracies. But it is not really getting closer to the truth…