Seriously: the Army is planning for the return of Xena

Home » Defence » Seriously: the Army is planning for the return of Xena

I wish I was making this up.

A document published by the Army for incorporation into future policy and capability planning states that between 2020 and 2050 the threats Australia faces are likely to be female led and female dominated. In response, the Army should enable the emergence of a Xena warrior cult within Australian women.

And consideration should be given to reducing special forces’ fitness standards to enable ‘Xena’ to thrive as a warrioress of the new frontier.

Like I said, I wish I was making this up.

Teaming: optimising military capability for the coming Era of Equality: 2020 to 2050 is 237 pages long and was first released in March 2017. More than a year after this drivel first made light of day it still sits proudly on the Army website.

And, worse, it appears that senior leaders are taking it seriously.

The author, Major Liz Boulton, thanks Mick Ryan for facilitating her return to the Army in a research capacity. Mick Ryan is a Major General and is the Commander of the Australian Defence College.

McDaniel’s LinkedIn profile lists him as the Director General Capability Investment Analysis at the Australian Defence Force. He previously served as the Commanding Officer of the Special Air Service Regiment and was the Special Operations Commander from 2013-2014.

The document calls for commanders to consider forming female infantry battalions, companies or platoons. And now we find that all female infantry soldiers in the full-time Army are being posted to 1 RAR.

This front line combat unit has not been mechanised. Instead, it has been feminised. No doubt, it will soon be known as 1 RAR (Fem) and will be graphically displayed on military maps with this symbology: 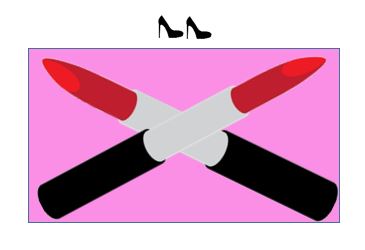 The document is based on a premise that the world is soon to experience an ‘Era of Equality’ that will unleash a return of Amazonian female warriors (considerable effort is made in this document to rewrite the ‘myth’ that combat was not predominantly a male-oriented hobby in the past):

It is not inconceivable, considering the trends described above, that in the 2020 to 2050 period, the Australian Army may face a female organised or female dominated type of adversary. The emergence, or return, of a female warrior type identity may pose an external threat, but also could be something Army harnesses from within its own society.

In response, the document urges the military to prepare for Australia’s ‘Xena’ personalities:

Army should aim to be the home of ‘Xena’ personalities, (no matter what they look like on the outside and what form their strength comes in – which of course is not always physical). Army could, through working with Xena personalities, lead Australia in its understanding and demonstration of excellent female leadership.

Commanders are then told not be scared of Xena, but to enable her and get out of her way.

When developing future Army strategy and capability, senior Army leaders are advised to consider these questions:

If society is on the cusp of a wave of women starting to reach their full potential, or of a ‘Xena-Return,’ Army should move quickly to exploit this advantage first.

– How would Army do this? Are male leaders capable of activating and enabling ‘Xena’ or will they be threatened and seek to diminish such people? Will they ‘cramp women’s style’ and, thus, dampen the possibility of creating new tactical, operational and strategic approaches to Operations? Should Xena development occur through some type of FET construct which, potentially, all serving women have the option to experience through a posting to such a unit? Should such a unit have its own physical entry standards? Should a future female-heavy capability be modeled on the existing infantry Battalion; Company or Platoon construct, or be something different? Should the physical standard be lowered for women seeking to join the Special Forces (SF) or should a female only SF capability be established?

If I am to understand this correctly, the only thing standing between the return of Xena after millennia of male chauvinistic opporession are fitness standards. So they’ve gotta go.

Bizarrely, when the document was launched on the Army website, references were made to comic book movies, Batman versus Superman, Justice League and Suicide Squad:

In the movie Batman versus Superman, Batman concludes that the era of a single superhero is over. To face the threats of the future, he realises he needs to assemble a super team, people with widely different skills but who, in common, are good and strong of heart. Reinvigorated by the example of Superman’s purity, Batman sets off to create the Justice League.  DC Comics continue this theme in the related film Suicide Squad. Here we see an eclectic bunch of oddballs and societal rejects, who – despite their flaws – each have unique strengths. A US special forces officer is tasked to bring them together, as they are the only ones capable of defeating evil meta-humans.

What does this have to do with the Army? When futurists scan the horizon, they universally agree that the future Army faces significant complexity, far greater than has been experienced to date. Much thought and resources have been applied to preparing the Army technologically – but what about Army’s approach to teamwork? What sort of teams will thrive in such an environment? How is the ‘human dimension’ changing? What socio-cultural forces are in play? Certainly, one of them is the shift in gender identity – for both men and women.

Gender? Again? While many may understandably feel a sense of ‘issue fatigue’ with the word gender, one argument is that rather than ‘leaning away’ from what has at times been a painful discussion, at this particular moment in history, Army needs to ‘lean in’ further.

I’m sure that someone, somewhere will lodge a complaint that this analysis did not incorporate the work of Wonder Woman.

Of course, this document did not just build upon the lessons from comic book movies or focus only on gender. All of the politically correct boxes were ticked:

Turning to Aboriginal Australia, there are many stories of strong women in Indigenous culture. Given protocols about who may tell these stories, I note that I do not have the authority to know or to convey any of these stories here.

Among women, weariness with all-white-male leadership teams is reflected through phenomena like the widespread adoption of the slogan “God, give me the confidence of a mediocre white man,” originally coined by Sarah Hagi…

Today people are impacted by legacy cultural influences, such as patriarchal and hegemonic masculinity notions, which view women as lesser than and the opposite of men…

The ridicule of safe spaces, for example, denies the reality of high rates of suicide among the GLBTIQQA community and the unique ways they can be exposed to greater harassment or violence compared to other demographic groups.

The percentage of women in Iran’s Parliament reached 6% in 2016 and, while this is still low representation, it was significant in that it was the first time in which women outnumbered Clerics. Many other countries and political parties have goals for 50% representation of men and women. The UAE has established a Ministry for Tolerance. They describe ‘tolerance’ as being “a supreme value and one of the universal principles connecting all of us.” Their aim is to operationalise the concept, to “make tolerance a strategy for the present and the future.”

Perhaps this excerpt from the Epilogue is the best quote of all:

Worried, she heads to a specialist gardening bookshop to find out more information. A new book, Oak Studies, advises that, when growing oak trees, lower branches do not always need to be shorn off – this is a remnant practice from days when the timber was needed for ship building. Oaks grow differently. Sometimes, their lower branches extend so far out horizontally, that their ends droop and connect with the soil. Apparently this allows the tree extra nourishment, but also to play a different role in the forest ecosystem. “Hmmm” she thinks.

Rummaging further, she finds herself drawn to a high shelf, at the back of the store. She discovers a heavy and dusty book titled, Xena Phytology. It has information on plants like Amazonians; Boudiccans; Joan-of-Arcians and Nancy Waklings. Suddenly, the Gardener laughs out loud. The strange shoots aren’t weeds, she realises, they are Xena-variants! A type of plant, which it turns out, was an intrinsic part of the forest ecosystem all along, before modern forest management techniques took hold. Further, the Gardener learns, some Xena-variant only sprout during particularly stormy weather, and are known to thrive in turbulent conditions.

The Gardener returns to the forest. Dark storm clouds loom overhead. She goes straight to her gardening shed. She boots up her ruggedized laptop. Lightning flashes in the windows. She knows she needs a new plan: to grow the new shoots, but also, to replenish and strengthen the whole forest…

You would expect to find this fanciful nonsense coming from La Trobe University’s gender studies department.

Unfortunately, these words come from a document designed to inform future policies on Defence strategy and capability.

So let’s hope that Donald Trump manages to secure world peace. Because if he doesn’t, we are screwed. 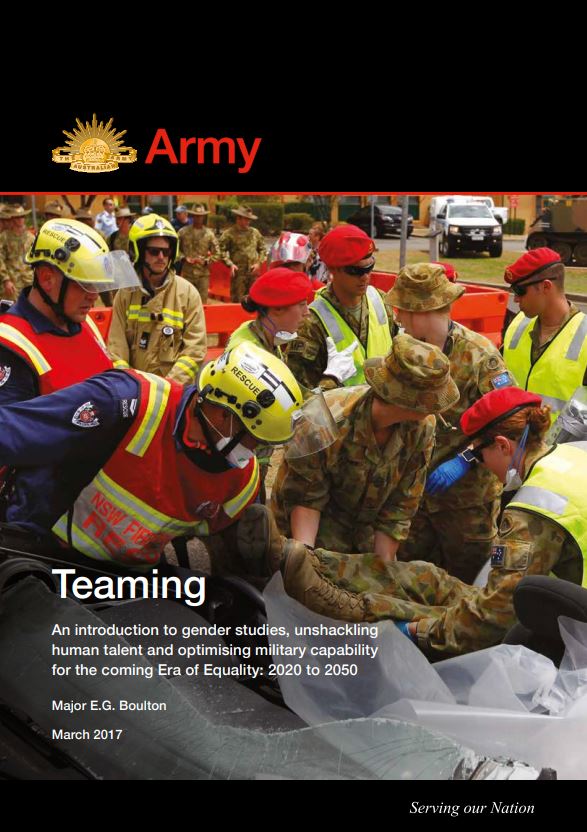 The front cover of ‘Teaming’.