Before, during and after the homosexual marriage campaign there was a claim thrown around constantly by those who supported this radical idea.

Basically, the argument goes, heterosexuals have made such a mockery of marriage that opposition to homosexual marriage was pointless and hypocritical.

And, I must admit, there is a skerrick of truth in this argument.

Heterosexuals have made a mockery of marriage. And they also did it without any help from the LGBTWHATEVER community.

Unfortunately for the rainbow activists, however, is this implicit admission in the argument: recognition of same sex relationships has only occurred because society in general has no respect for marriage at all.

So applauding homosexual marriage is like applauding at an event where everyone gets a trophy for being a loser.

It is only once the idea of marriage has been so sullied that it is basically a rotting corpse that a nation will shrug its shoulders and say whatever to demands from activists that the gay community should be able to feast on it too.

And all of this is a long way of stating the obvious: if you watch Married at First Sight then you are part of the problem.

I have no idea how long this show goes for or how many seasons have run. I have zero interest in the sleazy scandals that are pumped out for profit each week. Other than to take screenshots of the ‘headlines’ below, I have not watched an episode or read a single article about the latest (or any other) series.

But I do know this: this show epitomises the decline in respect for the most fundamental institution in our society. It is to our national shame that it is the highest rating television series on our screens.

More importantly, when ordinary Australians begin to shun shows like this, we will know we have reached a point where we can start winning the ground back on marriage. Until then, get used to the fact that our society is mucking about in a fetid swamp… 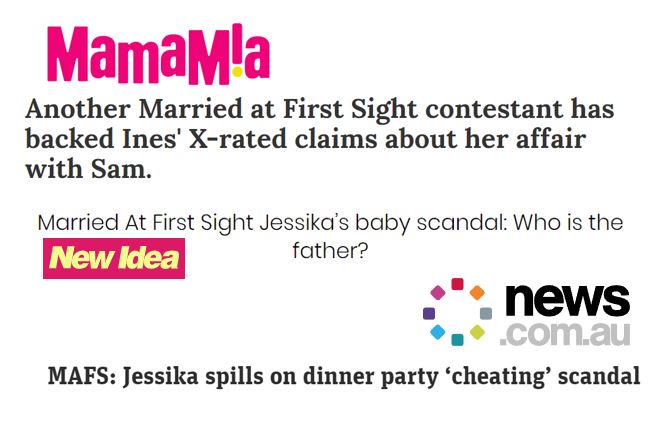