There’s nothing to see here…

So I doubt you will be either.

She rang to inform me that the New South Police would take no action against Gary Burns for this email: 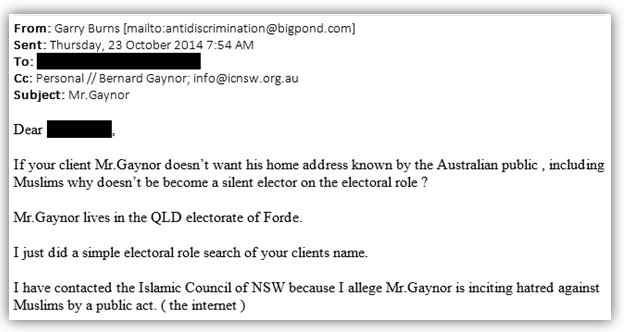 Gary Burns’ email confirming he accessed my address from the electoral roll and then offered it to Islamic organisations. 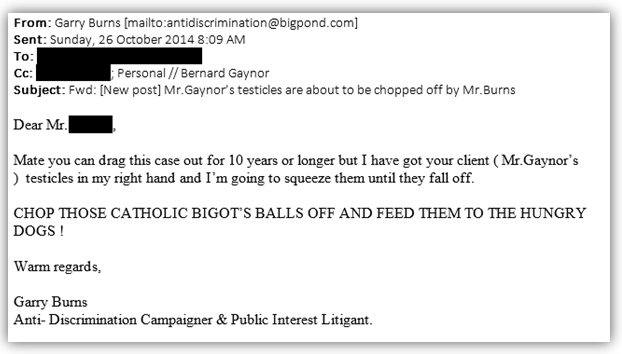 Gary Burns’ email threatening me with assault. It also contained a link to a post on his website with the same threat.

Or for any of the hundreds of other abusive emails I have received from him about such things as my children’s sexual preferences or how he thinks I deserve to be raped in jail.

As you may know, my family moved our home due to safety concerns after Gary Burns thought it would be a laugh to contact Islamic organisations and offer them my personal details. Hence my complaint to the police that Gary Burns was using a carriage service to harass, menace or cause offence.

It believes it has universal jurisdiction to silence all dissent to homosexual activism and was upset that I didn’t appreciate Burns’ emails.

However, the law in question here is a Commonwealth law. There is no jurisdictional issue and I was relieved yesterday that I did not hear the word ‘jurisdiction’ once.

Nope. There is a whole new excuse as to why the New South Wales Police won’t touch Burns’ emails. Nicole told me that no action would be taken this time around because Burns has claimed that his email was hacked.

As a story it sounds exciting. But it’s actually full of holes.

Have a good look again at the second email above. And then look at this screenshot of Gary Burns’ old website: 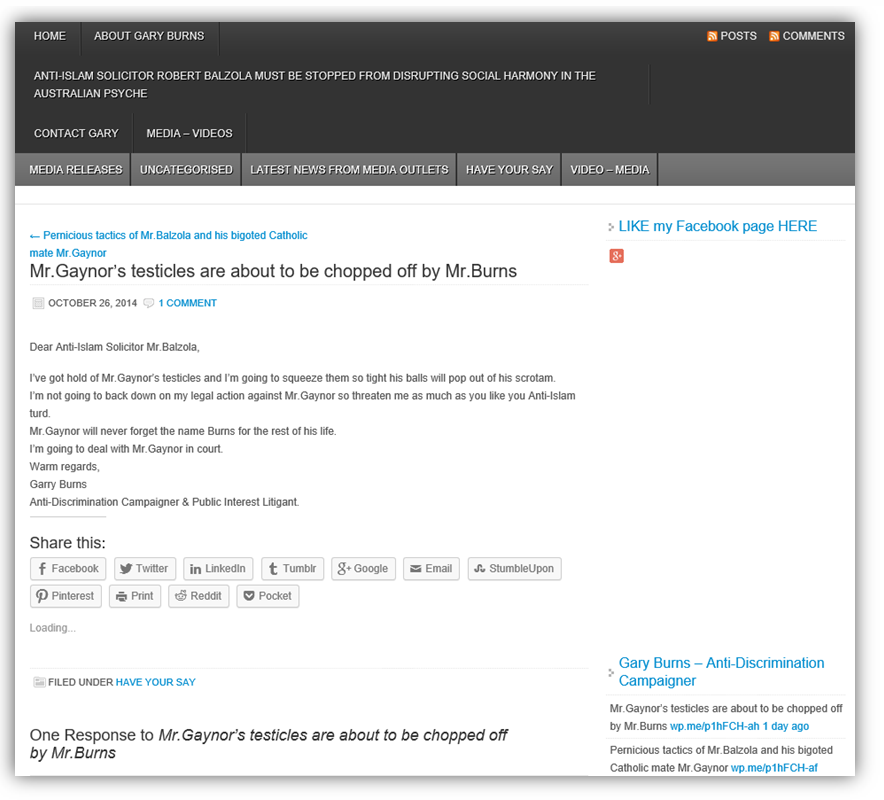 The article and the email, strangely, have identical titles and subjects. So either Burns’ website was hacked as well, or the mysterious ‘hacker’ decided to break his way into Burns’ computer for the purpose of emailing me a link to Burns’ article, or Burns’ email was not hacked at all.

Given Burns left the post up on his old website for months, I would be betting on the latter option. Especially so, given the same words also went up on his Facebook page: 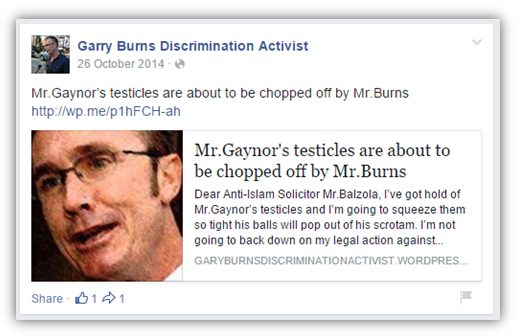 Suffice to say, I was rather irate when told by the good Chief Inspector that the case was closed due to the information police had received about the ‘hacking’. And the phone call ended shortly thereafter.

Then I quietly pondered the implications of what I had been told. I found them rather disturbing.

Let’s examine what this really means.

The New South Wales Police believed that there is some truth to the story that a cyber-criminal mastermind weaselled his way into the email account of one of the most prominent homosexual activists in New South Wales and started flinging outrageous messages to Islamic organisations that also contain very personal information.

If this ‘hacking’ claim has any skerrick of truth then Gary Burns’ life is in danger. Mix hackers, Islam and homosexual activists and you’re setting up an ‘Allahu akbar’ moment.

Yet there will be no police investigation of this at all, let alone any further investigation as to how my personal details came to be involved. And I am supposed to be entirely content with this situation.

However, I am not. That is why I called Chief Inspector Nicole Bruce back to ask why there would be no investigation of this serious problem.

It was then, I think, that we came closer to the truth.

Nicole also explained that nothing further would occur as the emails were considered to be ‘free speech’ in the context of my ‘relationship’ with anti-free speech activist Gary Burns and that a normal person would not consider them to be harassing, menacing or even offensive.

So I would like to put on the public record exactly what my ‘relationship’ with Gary Burns entails.

I write about attacks on the normal family unit. Then Gary Burns lodges complaints about me with the ADB because he claims there is no such thing as free speech. He also then bombards me with abusive emails because, like, free speech. I then have the pleasure of moving for my safety and spending hundreds of thousands of dollars defending myself in the courts, lest I be forced into a position of choosing between being ordered to apologise to Burns by magistrates who also like to chat with him privately or be jailed for contempt (I’d choose the latter by the way).

And, as the icing on the cake of this ‘relationship’, when I publish Gary Burns’ emails (the same ones that New South Wales Police have now informed me he claims were hacked), he lodges complaints with the ADB that I have ‘victimised’ him for making fun of his emails. Strangely enough, in all the documentation sent to the ADB, Burns has never once claimed that his email has been hacked.

As you can see, this kind of ‘relationship’ is not conducive for the exchange of Christmas cards.

By way of background, it should be noted that Chief Inspector Nicole Bruce is also a GLLO – that stands for Gay and Lesbian Liaison Officer. She didn’t seem to think that this detail was relevant. I beg to differ. But I am probably just biased and homophobic.

No doubt, as a Gay and Lesbian Liaison Officer, Nicole Bruce is extraordinarily well placed to determine that a gay activist’s emails threatening me with assault on the basis of my Catholic faith and causing significant safety concerns for my family are not harassing or menacing.

But, if this is going to be the way things are, I do have a suggestion for the New South Wales Police: amend your webpage on bias crimes. The way it’s written, people like me are liable to gain an impression that everyone is to be protected from bias crimes that target people as a result of things such as their religious beliefs.

That’s obviously not the case when it comes to Catholics.

I don’t want you to get the impression that the various police forces in this nation don’t take the offence of using a carriage service to harass or menace seriously.

Just last week an Adelaide-supporting Aboriginal woman was charged with this offence for writing on Facebook that Port Adelaide star, Eddie Betts, should ‘go back to the zoo’.

And recently an Ipswich woman in Queensland was charged for the statements below to an Islamic activist who objected to supermarkets selling T-Shirts with the Australian flag and the words, ‘Love it or Leave’: 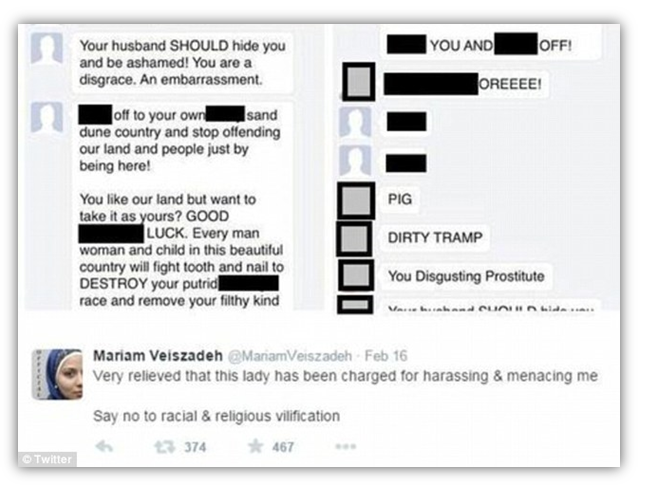 She was convicted and sentenced to 180 hours of community service.

I don’t condone this behaviour. It certainly does not help us to win the arguments that we need to win. But I would like some consistency. This is just another of the emails sent to me by Gary Burns: 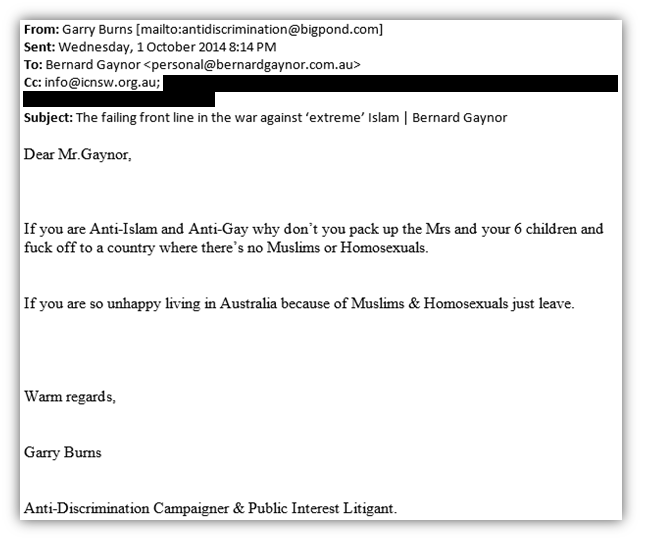 …oh yeah, Burns is also having people charged with this offence too – probably after a Gay and Lesbian Liaison Officer made an assessment about what an average person might find offensive.

This is from Burns’ website in March this year: 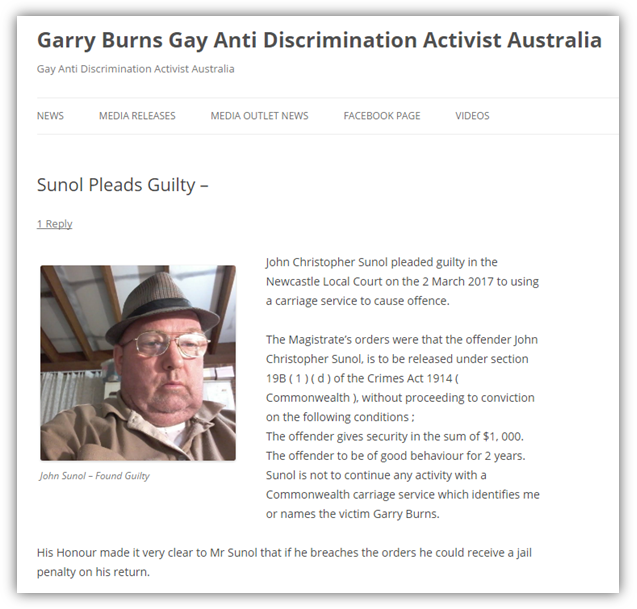