Freedom in Australia has just taken another hit…

Home » Featured » Freedom in Australia has just taken another hit… 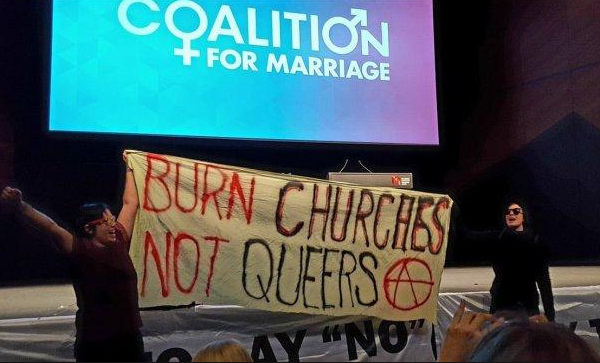 The ACT Thought Police have shown zero interest in taking action against those who hold up signs calling for Christian churches to be burnt. But they are processing ‘religious vilification’ complaints for an organisation inspired by one of history’s most infamous Satanists…

Or, more simply, welcome to Australia where true freedom has just taken another hit.

And also know that you will not hear about any of this in the mainstream media.

The ACT Civil and Administrative Tribunal has just decided that it should be able to determine anti-vilification complaints made against people living anywhere in Australia.

This decision supports a ‘religious vilification’ complaint made by a person associated with the Ordo Templi Orientis – a group which takes its inspiration from Aleister Crowley, one of last century’s most famous Satanists and the man who penned the Hymn to Lucifer.

Just for your information, the UK Telegraph ran an article in 2011 detailing evidence that linked Crowley to seven murders. It is also well documented that Crowley was a:

bisexual heroin addict [who] gained notoriety for advocating sexual promiscuity and prostitution and was dubbed ‘the wickedest man in the world’ by the Press.

For the highest spiritual working one must accordingly choose that victim which contains the greatest and purest force. A male child of perfect innocence and high intelligence is the most satisfactory and suitable victim…

…But the bloody sacrifice, though more dangerous, is more efficacious; and for nearly all purposes human sacrifice is the best.

These writings have been cited as an inspiration for the infamous Manson family murders by Gary Lachman, an occult historian who also played bass in his spare time for the 80s pop band Blondie.

Make of that what you will.

I’m just pointing out that it is inspired by a bloke who did.

The first book on the Ordo Templi Orientis Australia website bookstore is a life of Aleister Crowley. This same website also promotes The Book of the Law – which Crowley claimed was dictated to him by an Egyptian god. His later commentary about The Book of the Law stated this:

Moreover, the Beast 666 adviseth that all children shall be accustomed from infancy to witness every type of sexual act, as also the process of birth, lest falsehood fog, and mystery stupefy, their minds, whose error else might thwart and misdirect the growth of their subconscious system of soul-symbolism.

Again, make of that what you will.

Just know that under ACT law, it is unlawful to incite revulsion of a person or a group of persons on the basis of their religious belief. So please do not feel revulsion about the fact that the Ordo Templi Orientis unashamedly promotes Aleister Crowley.

I might get in trouble. Even though I live in Queensland.

Instead, feel revulsion that the ACT Thought Police (that would be the ACT Human Rights Commission) are so far gone that they actually think the Ordo Templi Orientis is a religion.

Unfortunately, all of this now means that if an activist living in the ACT does not like your views on marriage, or your beliefs about Islam, or your adherence to the biological reality that a male cannot be a female, you can wind up in court.

And even though you may have never set foot within cooee of the place.

In short, anything you write on Facebook or Twitter or on a blog can now be policed by the ACT legal system.

It shows, once again, that promises that radically redefining marriage won’t affect freedom of religion and speech are nothing but empty lies. The Commonwealth does not own the laws which affect speech about marriage.

The states and territories do.

For those who think this sounds a lot like my current predicament with an endlessly offended homosexual activist in New South Wales and that is now before the High Court, you are kinda right and kinda wrong.

But the law is not for simple people.

It’s for people who like complicated arguments and that’s why this case is kinda the same but different.

New South Wales is a state and the Australian Capital Territory is not. Hence the High Court ruling on my case may or may not have impact on what happens in Canberra. It’s pretty complicatedly simple really.

And we all know that when laws are complicated it’s much harder to know when you might not be breaking them.

The key take away is this: with the ACT Thought Police processing religious vilification cases for organisations inspired by Satanic occultists against people who live outside the ACT, one should not expect that it will be safe to express Christian views about marriage for much longer…