Did you know that the Chief of Navy has a Strategic Advisor on Islamic Cultural Affairs?

Her name is Captain Mona Shindy and she is pictured below in the Islamic uniform of the Royal Australian Navy: 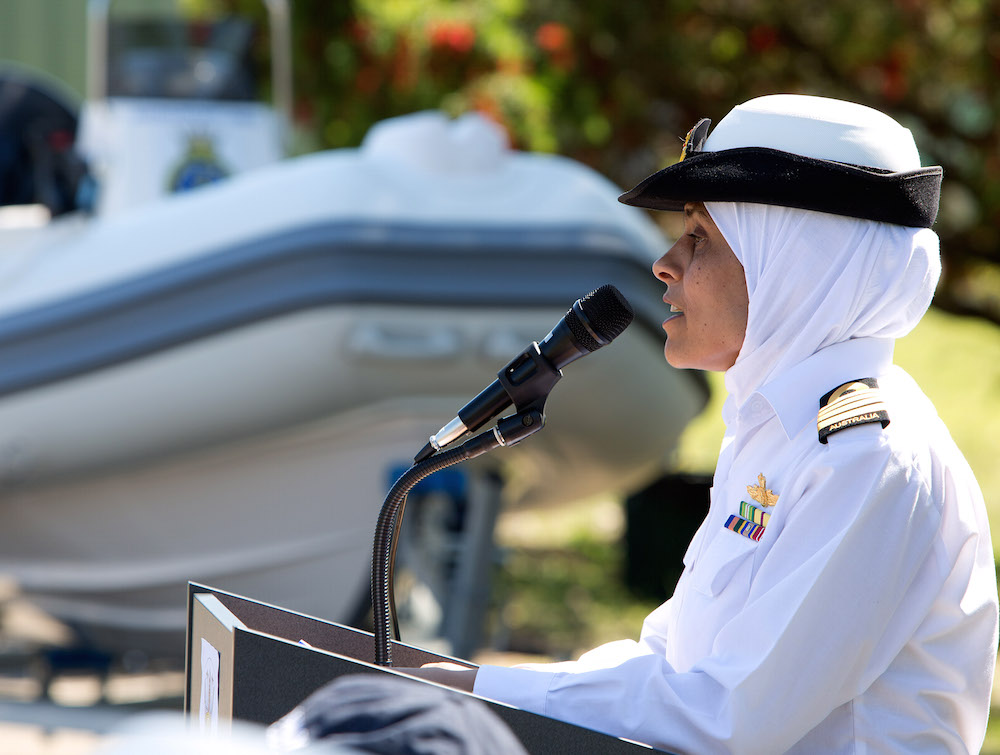 The Royal Australian Navy has a different uniform for Islam.

Recently, Captain Shindy and the Chief of Navy went to pay their respects to Australia’s Grand Mufti. This is how the Navy newspaper, Navy Daily, covered it:

Discussions between the two leaders covered the broadening Navy’s engagement with the Muslim community, including the future development of an Imam Chaplain in Navy, an increased understanding of Islamic Community sensitivities as well as the importance of increased cultural awareness.

It goes on to state:

Given this, one might like to know what advice Captain Shindy is providing. Luckily, a reader of this site advised me of an article written by Captain Shindy for Royal United Services Institute of New South Wales.  Here are 15 quotes – and what they really mean:

“Why then have Muslims been linked to terrorism? Terrorism is an unjustifiable, abhorrent act that has nothing to do with Islam. The extremist behaviour of groups purporting to be Muslims has been overplayed by the media for years constantly linking terrorist behaviours to Islam, e.g. use of the description ‘Islamist’, rather than separatist or militant.”

Real meaning: Let’s blame the media for the problem of Islamic violence.

“‘Jihad’ is an Arabic word meaning ‘struggle’. Big or main jihad is a spiritual struggle to resist the temptations of this world; to be righteous and follow God’s path. Small or less required (hopefully) jihad is armed struggle in the way of God. This is for the protection of the weak or oppressed whoever they may be and whatever religion they follow. Armed jihad is defence against aggression and oppression.”

Real meaning: Armed jihad is real, it exists, it is justified.

“The hijab is a head covering sanctioned in the Quran, which contains dress codes for both men and women.”

Real meaning: The hijab is part of Sharia law and Navy uniforms are now compliant with it.

“Are Muslim women oppressed? No way! That said, it is true that there are pockets around the world in some Islamic nations where women are wrongly treated.”

Real meaning: Islamic women aren’t oppressed. Except when they are.

“Muslim Australians need the same opportunities as all their peers to enjoy satisfying lives and to feel included in and valued by the society in the country they love. The community must understand and respond to the challenges faced by its Muslim citizens – doing so is vital to community cohesion and respectful integration; and to reducing the risk of individuals falling into the ‘radicalisation trap’.”

Real meaning: Extremism is our fault because, in some undefined way, Muslims don’t have the same opportunities as the rest of us.

“I personally find Western overplaying of the Sunni-Shiite rivalry to be unhelpful and often unwarranted. The media messaging seems determined at times to fuel flames. The bottom line is that commonalities between the sects significantly outweigh the differences which are in themselves not worthy of justifying division.”

Real meaning: The Western world is responsible for Sunni/Shia conflict.

7. Difficulties for young Muslims in Australia

“Young Muslims need to feel and see that they belong in Australian society. They need to be given equal opportunities and be protected, mentally and physically, by their government to the same extent as every other Australian. This requires empathy and an understanding that standing in the shoes of an Australian Muslim in today’s environment is not as simple or as easy as standing in shoes of a non-Muslim Australian.”

Real meaning: Young Muslims aren’t protected by the government because, you know, it’s like harder for them (again in some undefined way).

8. Need to look outside Western lens

“Continuing to assess Muslim behaviour and lifestyle through a Western lens, shaped through Western historical experiences and understanding (which is very different to Islamic history and tradition), is fraught with danger and is perhaps the main reason for incorrect conclusions and views being reached.”

Real meaning: Our Western values and views are the problem. If we looked at things from an Islamic perspective this violence would not seem like terrorism.

“The Charlie Hebdo event in Paris on 7 January 2015 is a case in point. From an Islamic perspective, the French government appears to be saying it is acceptable to ridicule what others hold as sacred, and cause outrage within French Muslim society; but it is not acceptable for Muslim women to exercise similar freedom of expression (not hurting anyone by the way) by wearing the hijab at universities or schools.”

Real meaning: From an Islamic perspective, Charlie Hebdo is our fault.

Real meaning: al Qaida is a political movement that opposes the US for oppressing the innocent and let’s just forget about September 11.

“There is also a need to understand why elements of the Muslim community are vulnerable to extremism and radicalisation. Islam calls Muslims to jihad to stop oppression. So once the idea of Muslim ‘oppression’ is planted in the minds of at-risk individuals, it is easier to move them to extremist actions.”

Real meaning: The problem with jihad is not jihad, but us.

“The same needs to happen with addressing terrorism. We need to move on more quickly from a single approach of talking tough and broadly bombing regions where we believe extremists operate. I am not sure there is often any real clarity as to who exactly is the enemy. As such, working on preventative strategies gives the best likelihood of long-term success. Security, jobs, income to support families, and stability to grow and educate populations, are the key ingredients to preventing the explosive, desperate reaction to despair that is extremism.”

Real meaning: It’s hard to know who the enemy is because Islam is complicated. But if we were nicer they’d go away.

“Indeed, the word ‘Islam’ needs to be removed from reporting on ISIS/ISIL or Daesh. The barbaric nature and ideology of these groups has nothing to do with Islam and we should work to limit their appeal to vulnerable Muslims, preventing the use and advertising of ‘Islam’ in their name. This would also limit the adverse impact they are having on the reputation and quality of life of the true peaceful Muslim majority. This must be coupled with frank, fearless, fair, respectful and honest debate addressing the root causes of grievances with a view to arresting the vicious cycle.”

Real meaning: We need to have a frank discussion about root causes of the problem. So we must not discuss the Islamic State’s reliance on Islamic teaching, doctrine and history.

“Tangible and practical strategies should include the provision of government assistance to the Australian Muslim community:

• to provide more mosques, with appropriately qualified Imams – this would reduce the promotion of unsavoury ideologies by uneducated do-gooders in makeshift community halls used for gatherings and prayer where no proper Islamic religious services exist; and

• by addressing raised grievances or giving plausible, defensible and non-discriminatory reasons why they cannot be addressed – open and frank dialogue is needed in order to build understanding, respect and trust. Government education of the Australian community by promoting inclusion and mutual respect also would help in balancing and smoothing out polarised perceptions and beliefs.”

“Muslim victimisation and disenfranchisement, real or perceived, puts the Muslim community under great strain. It erodes its confidence and self-esteem, and promotes a victim mentality, leading parts of the community to withdraw from the wider society. Indeed, segments of the Muslim community in Australia now struggle to integrate, to effectively communicate their true nature, and to reach their full potential. This, in turn, has impacted on the mental health of some within the Muslim community, and is a social phenomenon which needs serious and empathetic attention. Effective strategies are needed to address it. In short, real change can and must occur in Australia’s relations with its Muslim citizens. It will need strong leadership, a change in the dialogue, better exploration of grievances and community challenges, and implementation of a national education programme promoting understanding and inclusion.”

Real meaning: Muslims have a victim mentality and this is justified when the oppression is not even real, but just perceived. The only way to address this victim mentality is by recognising that the Islamic community are victims and deserve more support and recognition of their perceived grievances (even if they aren’t real).