This is the latest recruiting advertisement for the British Army:

The ‘Old World’ is dying. It might have nurtured our civilisation but it is now facilitating its downfall.

Australia can choose to follow this path to madness. Or it can be truly ‘independent’ and protect the now threatened light of civilisation.

Going by current advertisements for our own Defence Force, it appears that our politicians are happy to be lemmings and follow Europe off a cliff: 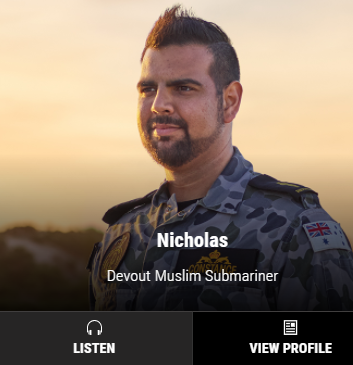 Indeed, as I point out in my detailed submission to the Religious Freedom Review, the Australian Defence Force has even admitted that it has a policy of protecting Islam while allowing vilification against Christians. This was written in a Defence report in April 2013:

“If a uniformed member were to support a gathering that insulted strongly held beliefs of a religion other than Christianity (to use his example, vilifying Islam with ‘Mohammed is Gay’ signs vs the ‘Jesus is Gay’ signs in the Mardi Gras) that member would be severely dealt with. In the case of the Mardi Gras, the opposite occurred.”

You can sign the submission rejecting Sharia law and calling for the protection of our Christian values and heritage here.